A weekend in a battleground state

With 22 days until the election, both John McCain and Barack Obama continue to court potential undecided voters in those all too important battleground states. And New Hampshire is no exception.

I spent the weekend in Manchester, my hometown, and on the Seacoast in Durham and Portsmouth. Politics is definitely in the air. A slew of negative McCain ads greated television viewers across the state. A steady stream of Obama ads countered the Republican rhetoric while a series of back and forth attacks between former Gov. Jeanne Shaheen and incumbent U.S. Sen. John Sununu were an addition to this already partisan mix. Freshman Congresswoman Carol Shea-Porter squared off against former Congressman Jeb Bradley and Congressman Paul Hodes defended his record against attacks from Jennifer Horn. Just another weekend in the battleground state New Hampshire has become!

The one thing that remains arguably clear is Granite Staters echo their fellow Americans in their call for change. And this caricature featuring President Bush outside a Portsmouth gift shop on Friday afternoon perhaps sums up voters feelings as the campaign enters its final weeks. 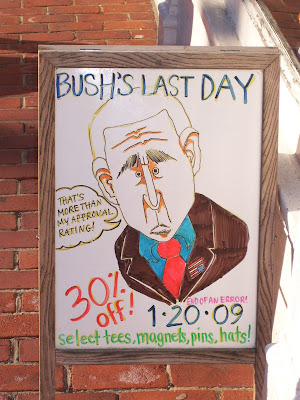