It's currently 78 degrees at the Weatherbug reporting station near my apartment; that must mean summer has made a long-delayed appearance in Brooklyn. And the thunderstorms that have swept across Brooklyn over the last couple of days simply confirm the previous observation. 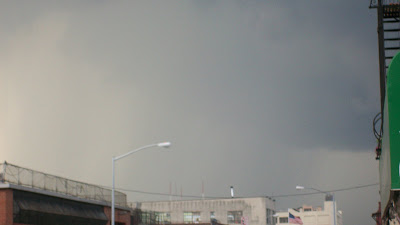 A couple of garden variety storms popped up over Brooklyn and Queens earlier this afternoon. A short downpour provided even more water to the basil, lettuce, parsley and tomatoes growing on my fire escape. The humidity remains, but the storms that swept across the area yesterday sparked tornado warnings in Fairfield, Nassau and Queens.

A short, but drenching downpour hit shortly after 6 p.m. The bulk of the storm passed north of Brooklyn, but two more followed behind it over the subsequent hours. Attached is a link to a video I took from my bedroom window late yesterday afternoon. Notice the lightning bolts in the background--over Manhattan.