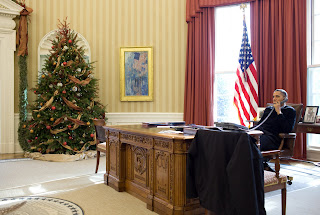 President Obama calls members of Congress from the Oval Office ahead of the U.S. Senate's vote to repeal "don't ask, don't tell" on Saturday, Dec. 18. [Photo by Pete Souza]

Was President Obama a decisive factor in the U.S. Senate’s vote to repeal “don’t ask, don’t tell” on Saturday, Dec. 18?

The White House released a photograph of the commander-in-chief calling members of Congress from the Oval Office ahead of the vote. The Senate voted 65-31 to repeal the Clinton-era policy. And the president plans to sign the bill into law later this week.

"As the president has long said, ending 'don't ask, don't tell,' and allowing gay men and women to serve openly in the military, will strengthen our national security while upholding the basic equality on which this nation was founded,” said the White House in a statement released shortly after the vote. “The president looks forward to signing the bill into law."

Obama had faced growing criticism from LGBT activists over what they perceived as his failure to forcefully lobby for the repeal of “don’t ask, don’t tell.” Did his last minute lobbying make a difference? Were these efforts enough to placate skeptical progressives who could prove pivotal in a possible 2012 re-election campaign? Perhaps. At the end of the day, however, “don’t ask, don’t tell” will become history once Obama signs the bill into law.

Obviously ending DADT is a good thing and in a year everyone will wonder what the big deal was. But with all the arguing back and forth between pro-Obama gays and anti-Obama gays, I'm not even sure anymore who to credit for it. As the famous saying goes, "Success has many fathers..."