This blog is a few days late but a number of New York activists poured Stolichnaya vodka down the drain in front of the Russian consulate in Manhattan earlier this week to highlight continued violence against gay and lesbian Russians. Anti-gay protesters attacked gay activists and European MPS in Moscow late last month as they attempted to deliver a petition to Moscow Mayor Yuri Luzhkov that would have allowed a gay Pride celebration. Protesters said their action highlighted the Russian government's culpability in this violence and broader discrimination against its gay and lesbian citizens.

A number of activists have questioned the rationale behind the protest against Stoli because of its support of the Lambda Legal Defense & Education Fund and other LGBT organizations and causes in the United States. These questions are fair. The fact remains, however, the Russian government's record with regards to gay rights remains appalling as the world saw last month in Moscow. Stoli is a responsible corporate citizen. Gays love their alcohol. This week's protest will hopefully draw upon others to demand change from the Russian government. 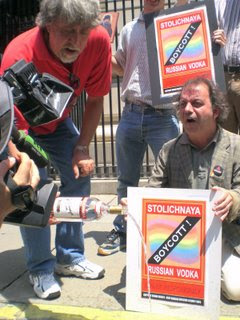 From left: Activist Gilbert Baker pours Stoli vodka down the drain as Brendan Fay holds a sign outside the Russian consulate in Manhattan on June 5 [Picture courtesy of www.joemygod.blogspot.com]