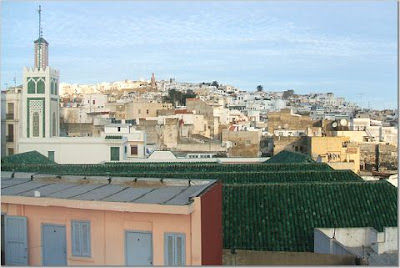 I preface this blog with affection for the Moroccan people who so warmly welcomed me into their country during my trip to Tangier and Fes last November. It ranks among the most fascinating (and beautiful) places to which I have traveled... but news that officials arrested a gay man in the northern city of Al-Qasr Al-Kabir who was reportedly getting married saddens me.

Al-Arabiya reported a court sentenced the man and five others to jail time for attending the lavish two-day wedding. A Moroccan newspaper later reported local protestors caught and beat him. Homosexuality remains illegal under Moroccan law but gays and lesbians have become very common in Tangier, Marrakech and other popular tourist destinations across the country. What happened to this man remains an unfortunate reminder of the rampant homophobia and intolerance which remains in the majority of the world. One may be all too quick to ridicule Moroccans -- a Muslim, developing country in North Africa which was a French protectorate until 1956 -- for persecutin gays and lesbians within their society. But Morocco remains no better (or no worse) than the majority of the world which arguably fails to view gays and lesbians as people worthy of basic humanity, respect and dignity.

THE HYPOCRISY OF HOMOPHOBES IN MOROCCO IS ONLY A SIGN OF IGNORANCE.SOME PEOPLE MIGHT HAVE SEX WITH GAYS AND THEN FEEL NO SHAME AT TELLING JOKES ABOUT THEM.THESE ARE MUCH NICER IF COMPARED TO THOSE WHO SUGGEST THE GAYS MUST BE KILED
!!!

Very interesting blog. Tangiers is a very beautiful and fascinating city.
Many famous writers like Paul Bowles and William Burroughs many times visited Tangier and even called it their home and had in Tangiers property.
Also I know that Tangier was also the world's first and famous gay resort - a role it maintains to a lesser degree today.