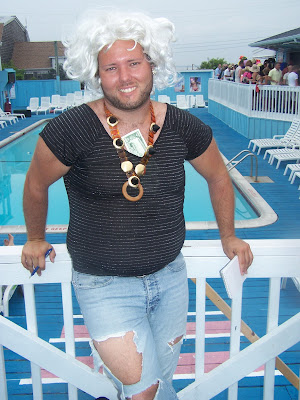 The Fourth of July has come and gone and Fire Island continues to slowly recover from the holiday weekend onslaught. The past few days featured a whirlwind of parties, barbecues, quick jumps into pools, dancing the night away and other activities endemic to the beach. The Invasion of the Fire Island Pines remains the highlight of these myriad of events.

Hundreds of drag queens board a ferry in Cherry Grove to invade the Pines each July 4. The late-John Whyte refused to serve a man dressed as a woman in 1975. Panzi and a group of fellow queens boarded a water taxi the following year and 'invaded' the Pines. The annual commemoration has become one of Fire Island's most revered and celebrated summer events. And this reporter, who donned a cheap Old Navy top, ripped blue jeans and gaudy jewelry as the incomparable Ciara Borealis, was among them.

Seeing thousands of people awaiting the ferry's arrival in the Pines remains one of the most exhilarating moments I have experienced both as a faux queen and a reporter. Fire Island may represent a lot of things to a lot of people--elitism, personal entitlement, a misguided social scene based on parties, drugs and sex, clique-like mentality--but one thing that remains true is the beach (and its events) is one of the most unique places in the world.