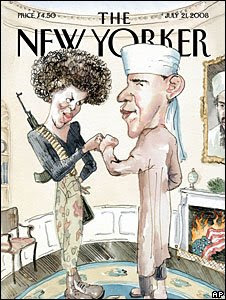 My publisher and I were putting the fifth issue of this season's Fire Island News to bed yesterday, so I didn't have time to opine about the brouhaha that erupted on Monday over the New Yorker cover that depicts Barack Obama in traditional Muslim clothing and his wife Michelle as a terrorist fist bumping inside the White House with a picture of Osama bin Laden on the wall and the American flag burning in the fire place.

Rumors and speculation surrounding the Obamas' religion and patriotism certainly persist, and the cover obviously attempted to provide some satirical commentary. The New Yorker's readership, which is largely wealthy and progressive Manhattanites and other Gothamites, arguably understood the statement the magazine's editors tried to make. The lesson from this week remains, however, the vast majority of the country does not think like the demographic to which the celebrated publication seeks to reach. The reactions are obviously very real. They touch a sensitive nerve within the Obama campaign and among its supporters and raise a number of questions over how the media continues to cover the ongoing election cycles.

Are the editors of the New Yorker anti-Muslim? Most likely not. But they must consider the impact these election-inspired satires have among a public that is already highly polarized and sensitive.

I would agree with you on a certain level but the truth is that the vast majority (at least 3/4) of New Yorker subscribers are outside New York.