Family members of the 191 people killed in the Madrid train bombings placed flowers, wreaths and other tributes to mark the fifth anniversary of the attacks.

Ten bombs that had been hidden in backpacks exploded within minutes on four crowded commuter trains that had been en route to Madrid during the morning rush hour. Then outgoing Prime Minister José María Aznar initially blamed the Basque separatist group ETA, but a Spanish judge later indicted more than two dozen men of Middle Eastern and North African descent.

The attacks, which injured 1,800 people, remain Europe's most deadly act of terrorism. And 11-M also carries a personal connection.

I was in Spain less than a week after the attacks to visit friends whom I had met in Granada the previous year. The country was clearly in mourning as the continued broadcast of memorials and other commemorations on Spanish television--and even on the Madrid subway--indicated. Some of my friends initially expressed concern over people of Arab and Middle Eastern descent who lived in the country, but I found time and time again the Spanish people refused to allow these atrocities to prevent them from living their lives... and for my friends and I this defiance meant a beautiful weekend partying beneath the Alhambra in Granada and relaxing in the countryside. 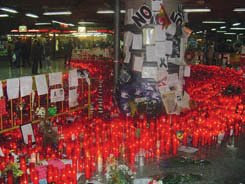 A sea of red candles paid tribute to the victims of the bombings inside Atocha station in the heart of Madrid [March 23, 2004 - photo by Michael K. Lavers]

A lesson my insightful father has always instilled in me is a terrorist's most effective weapon is fear. And the best way to counter their intentions is to remain defiant of it.