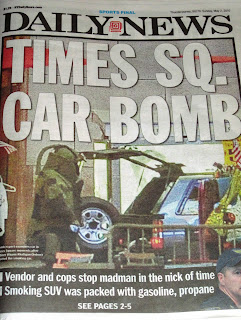 The last thing I thought I would hear while watching late night television on my friend Kevin’s couch in Philadelphia was a car bomb had almost been detonated in Times Square, but this news is exactly what I heard early Sunday.

Someone placed two propane tanks, two gas containers, two clocks, gunpowder canister and fireworks found inside the SUV parked on West 45th Street around 6:30 p.m. on Saturday, May 1. Mayor Michael Bloomberg was still in the tuxedo he wore to the White House Correspondents’ Dinner in Washington, D.C., earlier in the evening as he and New York Police Department Commissioner Ray Kelly briefed reporters around 2:15 a.m. on Sunday, May 2, but the mere prospect of a catastrophic explosion in the heart of Times Square nauseates me.

WABC reported earlier tonight the Federal Bureau of Investigation has identified a “person of interest” in the case. Throngs of tourists have once again returned to the Crossroads of the World. And while this attempted car bombing is an extremely sobering reminder of the scourge of (potential) terrorism, my father’s advice to not live in fear of those who seek to terrorize remains an all too important mantra for this New Yorker and others around the country.