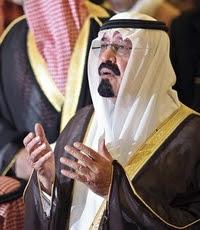 Saudi King Abdullah's visit to the United Kingdom has caused a row among activists and even politicians for the kingdom's human rights abuses.

Human rights activists and others, such as Conservative Party leader David Cameron, have used King Abdullah's state visit to the United Kingdom this week to highlight Saudi Arabia's less than stellar (to say the least) human rights record. The Policy Exchange used the king's trip to London to accuse the reclusive regime of providing British mosques with materials which allegedly urges among women, gays and other so-called enemies of Islam. The kingdom's persecution against gays (and women for that matter) are widely documented by Amnesty International and other human rights organizations across the world. But the United Kingdom, the United States and the European Union must walk a fine line with the Saudis because of their dependence on the kingdom's vast oil resources. This excuse does not, in any way, justify the relative silence the West has arguably shown towards these abuses. But it does highlight the broader geo-political and economic considerations that must be addressed in future negotiations.

On an arguably related note, the Jamaica Gleaner reported today that a textbook recommended by the island's Department of Education concludes same-sex partners can actually form families. Jamaica arguably remains one of the most homophobic countries in the world with routine violence and persecution among LGBT people on the Caribbean island. The Jamaica Gleaner itself reiterates this attitude in its coverage of the curriculum.

"The administrators of the prominent institution also pointed out that the teacher told her class that homosexual unions were not socially accepted," the article read.

Some observers may maintain it remains far too easy for LGBT activists (and bloggers) in so-called developed countries in Europe or North America to immediately criticize the Saudis, the Jamaicans and others who maintain these homophobic attitudes for their own benefit. This could stem from power dynamics established through colonialism, anti-Islamic sentiments and other social, political and economic factors. But the problem clearly remains. The Jamaica Gleaner's own reporting proves this point without a doubt.