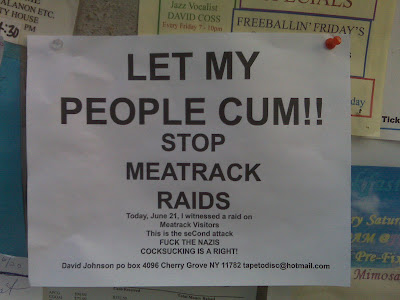 This sign appeared on a bulletin board in Cherry Grove last Sunday after reports of arrests inside the Meatrack began to circulate wildly across Fire Island--and beyond. [Photo courtesy of Philip Otten]

With all of the gossip, rumor and even innuendo swirling across Fire Island and the gay blogosphere in recent days about what reportedly happened inside the Meatrack, it is important to point out rangers with the Fire Island National Seashore did not arrest anyone. They did, however, issue two citations for disorderly conduct and one for possession of a controlled substance on June 15 and three more for disorderly conduct on June 21. A FINS spokesperson stressed to me yesterday these citations are not part of any calculated attempt to target gay people or raids into the Meatrack, but rather are simply part of routine patrols.

FINS' budget this year provided additional resources to fund more patrols of stretches of beach over which it maintains jurisdiction. This fact explains the numerous accounts of people who said they have seen more rangers inside the Meatrack, also known as the Carrington Tract, in recent weeks. But it also did little to dampen the suspicion and downright outrage many in both Cherry Grove and the Fire Island Pines continued to express to me last night in both hamlets. These citations have certainly handed FINS some very unwelcome attention. And they have also shed an unwanted spotlight onto the Grove and the Pines. The story may fade into oblivion once the facts of what happened become clear, but it certainly opened a can of worms many on Fire Island thought had been permanently sealed long ago.