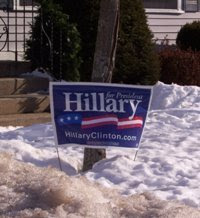 The New Hampshire primary, which took place on January 8, seems like a arguable distant memory.

The think overcast that hung over Fire Island today cannot contain the excitement of millions of Americans, myself included, over the history that was made last night. Illinois Sen. Barack Obama clinched his party's nomination after a campaign that lasted 16 months. I endorsed him earlier this year ahead of the New Hampshire primary. I continue to support his candidacy, and the site of him announcing his victory in St. Paul last night was nothing short of monumental out of the sheer fact he is the first black person in this country who could arguably become president.

The last 16 months have certainly exposed me to an extremely diverse range of political views. Operatives who represented the candidates on both sides of the aisle guaranteed this journalist had more than his share of material on which to base his coverage. Growing up in New Hampshire gave me a unique perspective as to how the process works--and how candidates try to home their messages, etc. And it's arguably a huge relief that this lengthy process has come to an end. But all of us--even those who backed New York Sen. Hillary Clinton, who herself made history with her very strong and determined campaign--can eventually take some solace in the fact Democrats have nominated a black man as their candidate for the White House. This nomination indeed marks a new era in American politics.