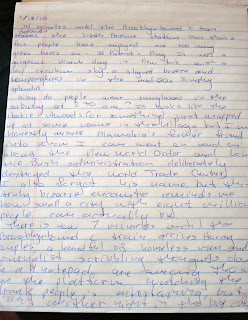 A late-night stream of consciousness from the Sixth Avenue subway station.

Fourteen minutes until the Brooklyn-bound L train departs the Sixth Avenue station. More than a few people enjoyed one too many green beers on St. Patrick's Day, but it was a gorgeous March day in New York with a deep cerulean sky, a slight breeze and temperatures in the mid-60s. Simply splendid!

So why do people wear sunglasses at 2:30 a.m.? It looks like the Hookie Awards (or something) just wrapped up at some venue in the Village, but I'm honestly unsure why Alixandria's former friend into whom I ran went on and on about the New World Order and how the Bush administration deliberately destroyed the World Trade Center. I honestly forgot his name, but this truly bizarre encounter reminds me how small a city with eight million people can actually be.

There are now seven minutes until the Brooklyn-bound L train departs the station. Sexually-charged couples, a handful of homeless men and a journalist scribbling thoughts down on a $1 legal pad are among those on the platform. Watching the drunk people is certainly entertaining, but it is just another night in the big city.