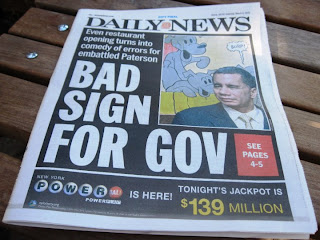 Embattled Gov. David Paterson did not step-down on Friday as this blogger and several others had speculated, and his schedule today clearly sends a powerful message to those who continue to urge him to resign.

Paterson is scheduled to hold a forum on the budget at Brooklyn Borough Hall later this morning. The governor is slated to speak at a symposium on the proposed Sugared Beverage Tax in Albany this afternoon before he meets with New York Archbishop Timothy Dolan and members of the New York State Catholic Conference in the Capitol at 3 p.m. Paterson is also scheduled to attend the Irish Legislators Society's annual Legislators' Dinner at the Capital District Irish Cultural Center.

A governor's schedule is not normally newsworthy, but it certainly indicates Paterson is doing everything he can to shift focus away from his ongoing travails. The fact remains, however, the concurrent scandals in which he finds himself are the story. And his eventual resignation remains almost certainly inevitable.