New Yorkers throw the bums out 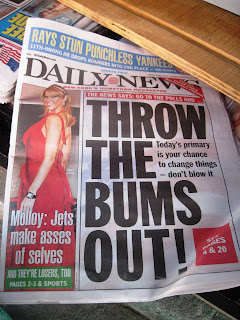 Both the Daily News and the Post yesterday urged New Yorkers to go to the polls and ‘throw the bums out,’ and they did just that.

Gustavo Rivera trounced scandal-plagued Senate Majority Leader Pedro Espada, Jr. [D-Bronx] by a 67 to 28 percent margin. Espada remained defiant after he conceded to Rivera. “Understand I am not quitting anything,” he told supporters at a Bronx bar as the New York Times reported. “As I go to sleep and wake up re-energized, I am ready for a new fight.”

Espada’s ‘new fight’ may very well come separate courtrooms as he continues to defend himself against allegations he siphoned $14 million from the Soundview Health Center and questions about whether he actually lives in the district he represents in Albany. He is not the only politician, however, New Yorkers sent packing last night.