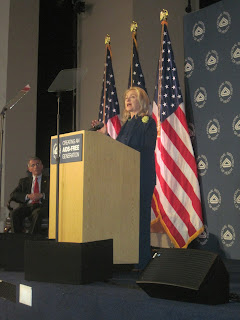 Secretary of State Hillary Clinton said on Tuesday, Nov. 8, that repealing anti-gay laws is among the ways to curb the spread of the global HIV/AIDS epidemic.

Clinton spoke at the National Institutes of Health in Bethesda, Md., ahead of the U.S. Conference on AIDS that will take place in Chicago from Nov. 10-13 and World AIDS Day on Dec. 1. She used her NIH speech to announce that the White House has earmarked an additional $60 million to fight the epidemic in sub-Saharan Africa. The State Department has also appointed Ellen DeGeneres as a special envoy to raise global awareness of AIDS.