The Occupy Movement and the Accountability Question 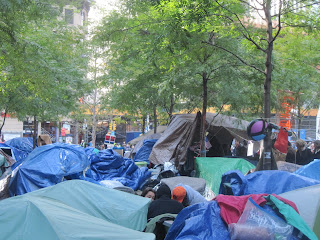 This was one of the many complicated questions that came up at a panel discussion about the Occupy Wall Street movement that WNYC host Brian Lehrer moderated at the Jerome L. Greene Performance Space in lower Manhattan on Tuesday, Nov. 1. Former New York Gov. Eliot Spitzer; Crain’s New York Business contributor Greg David; Occupy Wall Street organizer Jesse LaGreca, who blogs at the Daily Kos and Kathryn Wylde of the Partnership for New York City, who is deputy chair of the New York Federal Reserve’s Board of Directors, certainly offered a variety of opinions and insights into the grassroots movement that has increasingly captivated the country in recent weeks. The panelists agreed that economic inequality in this country is unacceptable, and they suggested to varying degrees that the so-called 99 percent are justifiably angry at corporate America and their surrogates on Wall Street and on Capitol Hill.

Democracy is not an neatly packed form of government as a stroll through the Occupy Wall Street encampment in Zuccotti Park near Ground Zero earlier today literally proved—corporate money in American politics, war, unemployment and even civil rights were among the topics to which Occupiers drew attention. One can certainly argue that dissent is the highest form of patriotism. The question remains, however, whether organizers within the Occupy movement are able to offer tangible solutions to the country’s social, economic and political inequalities that can effectively hold the powers that be accountable.

The answer is as complicated as the form of government under which the Occupy movement is able to expand.