Boy in Bushwick scored a few political brownie points last night with his predictions outside of his assertion former U.S. Sen. Fred Thompson [R-Tenn.] would drop-out after a disappointing showing in Iowa. But the political frenzy shifts to my home state of New Hampshire.

If the conversation with my mother last night in Manchester is any indication, she and her fellow Granite Staters are in for a long and dizzying ride until next Tuesday's primary. And a number of LGBT New Yorkers are planning to head up to New Hampshire this weekend to campaign in support of U.S. Sen. Hillary Clinton [D-N.Y.], former U.S. Sen. John Edwards [D-N.C.] and other White House hopefuls as indicated in the story I posted on EDGE New York yesterday. I join the legions of other journalists, pundits and others who will watch New Hampshire closely over the next few days. 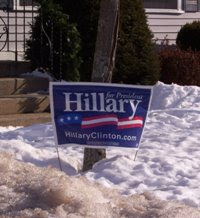 Party loyalists contend not even feet of snow can stop them from supporting their candidates in the last days before the New Hampshire primary.

With less than five days until New Hampshire voters cast their voters in the first-in-the-nation primary, a number of LGBT New Yorkers plan to hit the Granite State stump in support of their respective candidates.

Daryl Cochrane, a resident of Hudson Heights in upper Manhattan, plans to go door-to-door in Manchester as part of U.S. Sen. Hillary Clinton [D-N.Y.]’s last-minute efforts to court undecided voters. He volunteered for former Vermont Gov. Howard Dean in the days leading up to the 2004 New Hampshire primary. Cochrane told EDGE in a recent interview from his Chelsea office that he looks forward to going back to the Granite State.

"It’s a unique experience because we are in close vicinity as New Yorkers and are able to do it," he said. "I certainly want to go and do as much as I can to support her [Clinton]."

National Stonewall Democrats board member and Queens resident Melissa Sklarz plans to canvass neighborhoods in Concord, the state capital, in support of Clinton. She said she feels she and other New Yorkers can effectively discuss how she feels the former First Lady has done for Empire State residents since they first elected her in 2000.

"I can give the good people of New Hampshire some good experiences about Hillary in the Senate," Sklarz said.

The Clinton campaign has chartered several buses to bring volunteers from the city to New Hampshire tomorrow afternoon. But some politicos, such as Sunnyside, Queens, resident and NSD board member Jon Winkleman, plan to go directly to the Granite State from Iowa.

He told EDGE during a brief telephone interview in Des Moines hours before Iowans arrived at the caucuses that he looks forward to joining Sklarz and others in their attempt to highlight Clinton and her record.

"It’s really important for New Yorkers to go out and stand up and say, this is what Hillary has done for us," Winkleman said.

Kevin Jennings, founder and executive director of the Gay, Lesbian and Straight Education Network, has also traversed the Hawkeye State over the last few weeks but in support of U.S. Sen. John Edwards [D-N.C.]. He plans to arrive in New Hampshire tomorrow to begin going door-to-door and calling potential voters. Jennings, himself a North Carolina native, asserted his belief as a New York resident that the 2004 vice presidential candidate is the best hope the Democrats have to reclaim the White House in November.

He even maintained the more than three feet of snow on the ground across most of the state would not stop him and his fellow volunteers.

"I’m happy to get soaked socks in New Hampshire if that’s what it takes to help people hear Sen. Edward’s message," Jennings joked.