From Pier 11 to Red Hook

Yesterday was an absolutely beautiful late August day in New York. The humidity was low. A refreshing breeze cleaned the air. And I spent the afternoon at Ikea in Red Hook picking up some long-delayed odds and ends for my apartment.

I am certainly not a fan of expansive box stores, but I confess I take a trip to Ikea or Target in Brooklyn or on Long Island once or twice a year. Part of the "fun" of the trip was the free water taxi from Pier 11 in lower Manhattan to Red Hook. There is truly no better way to see New York, and here are some snapshots from the afternoon. 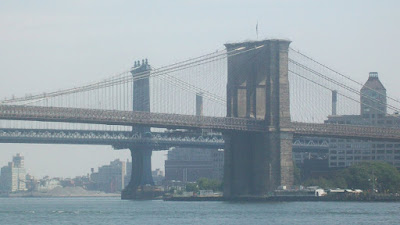 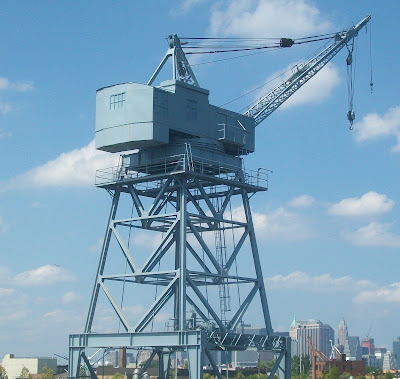 A crane along the Red Hook waterfront 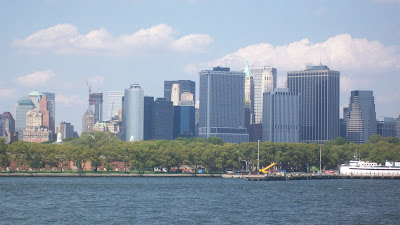 The lower Manhattan skyline with Governor's Island in the foreground 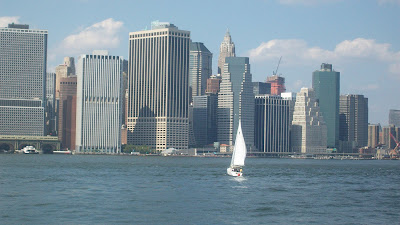 As the National Organization for Marriage and their allies continue to push for a repeal of nuptials for gays and lesbians in Iowa and Maine, ethics commissions in both states have called upon NOM to answer questions about those who fund their campaigns.

The Iowa Ethics and Commission Disclosure Board made the request to NOM in an Aug. 27 letter. And the Maine Commission on Governmental Ethics and Election Practices wrote Stand for Marriage Maine PAC Treasurer Joseph Keaney and NOM executive director Brian Brown on the same day.

The much broader question is obviously why NOM and its supporters feel the need to overturn both the Iowa Supreme Court decision in April and the passage of legislation in Augusta in early May that extended marriage to same-sex couples in both states. The specific concerns, however, revolves around the role the Mormon Church, the Diocese of Portland [Maine] and other religious organizations continue to play in the anti-marriage campaigns in both states, and even allegations of money laundering. These questions are indeed disturbing, if not at all surprising.

The Lion of the Senate has died.

Senator Edward Kennedy [D-Mass.] lost his battle to brain cancer late last night at his Cape Cod home. His family released a statement shortly after he passed away.

“We’ve lost the irreplaceable center of our family and joyous light in our lives, but the inspiration of his faith, optimism, and perseverance will live on in our hearts forever," it read. “We thank everyone who gave him care and support over this last year, and everyone who stood with him for so many years in his tireless march for progress toward justice, fairness, and opportunity for all. He loved this country and devoted his life to serving it. He always believed that our best days were still ahead, but it’s hard to imagine any of them without him."

The White House issued a statement earlier this morning.

"Michelle and I were heartbroken to learn this morning of the death of our dear friend, Senator Ted Kennedy," President Barack Obama said. "For five decades, virtually every major piece of legislation to advance the civil rights, health and economic well being of the American people bore his name and resulted from his efforts."

Some of the groups that directly benefited from Kennedy's legislative agenda also mourned the senator's passing.

“The nation has lost its greatest champion and strongest voice for justice, fairness, and compassion," Human Rights Campaign President Joe Solmonese said. "The loss to our community is immeasurable. There was no greater hero for advocates of LGBT equality than Senator Ted Kennedy. From the early days of the AIDS epidemic, to our current struggle for marriage equality he has been our protector, our leader, our friend. He has been the core of the unfinished quest for civil rights in this country and there is now a very painful void. Our hearts go out to the Kennedy family."

Growing up in New England, it was almost impossible to escape the Kennedy family mystique. Kennedy himself was a man who saw unspeakable tragedy. His actions--especially those on Chappaquiddick Island in 1969--almost certainly revealed his darker side, but there is no doubt the Lion of the Senate leaves behind a tremendous legacy. He held a family together during many of its darkest moments. And Kennedy became a voice for millions of Americans who had none. May he rest in peace!

Posted by Boy in Bushwick at 7:34 AM 0 comments

It actually turned out to be a largely beautiful summer weekend on Fire Island, but many people who would have otherwise ventured to the beach stayed on the mainland because local officials closed the beaches ahead of Hurricane Bill.

The storm passed hundreds of miles southeast of Fire Island, but waves of more than 10 feet rolled onto the beach throughout the weekend. The strongest swells to buffet Fire Island came last night and early this morning. Bill caused some minor to moderate beach erosion in Cherry Grove, the Fire Island Pines and other areas. This reporter spotted mangled snow fencing, wooden planks and other debris scattered across the beach earlier today. And a four foot wave inundated the dune tongue around 8:45 last night as he stood on a beach access in the Grove.

All dramatics aside, Bill certainly demonstrated Mother Nature's power. It provided local surfers with a rare opportunity to hang 10 on the beach, but the majority of Fire Islanders who are accustomed to storms took Bill in stride. 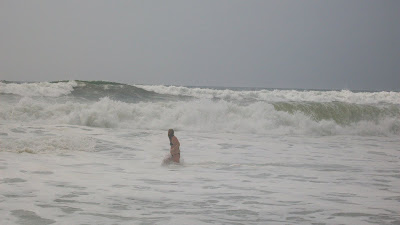 A woman swims in the rough surf off Corneille Estates on Aug. 22. 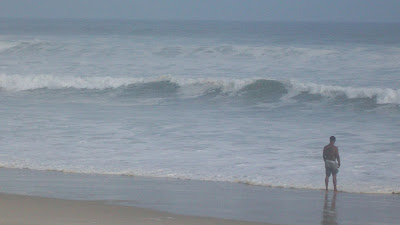 A man watches the surf from the beach in Cherry Grove on Aug. 22. 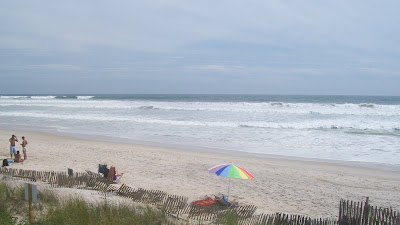 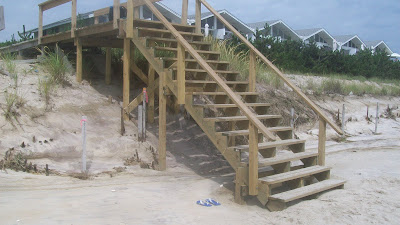 Waves from Hurricane Bill eroded the sand around the Atlantic Walk beach access in the Fire Island Pines (as seen on Aug. 23.) 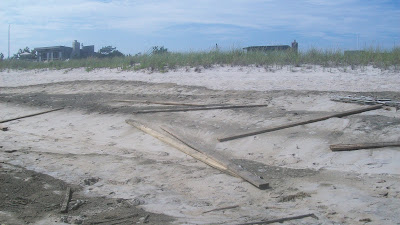 These wooden beams are among the debris on the beach in the Fire Island Pines. 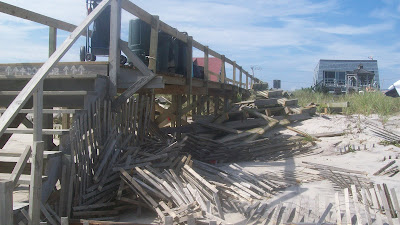 Erosion near Doctor's Walk in Cherry Grove on Aug. 23.

A few snapshots of Fire Island from the past week...

Dawn begins to break over Ocean Beach on Aug. 17

Sunrise over Seaview on Aug. 17 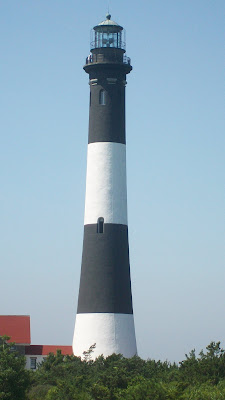 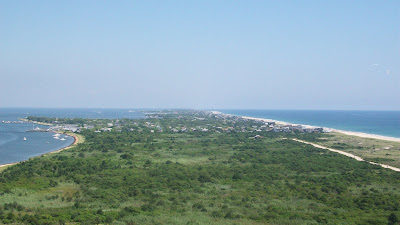 An upside to the dog days of summer?

After nearly two weeks in Fire Island, Maine, Massachusetts, New Hampshire and a few points in between, I have finally returned home to Bushwick. I actually came back from Fire Island late Monday night, but the dog days of summer have finally arrived in the five boroughs.

Eunice Kennedy Shriver's death on Cape Cod, former Alaska Gov. Sarah Palin rather ridiculous proclamation the White House's health care proposal includes so-called "death panels" and Cherry Grove's fascination (and love) of my sarong late last week are among the notable items from the past few days. August usually brings a slower news cycle. Politicians have left Washington for the confines of their home districts. New Yorkers who are able have traded the concrete jungle for Fire Island, the Hamptons or the Catskills. And a steady stream of substitute anchors have provided some temporary relief from the talking heads who normally dominate cable news. Who said the dog days of summer were all bad?

Today is the fourth day of my extended vacation here on Fire Island. The pool at the Ice Palace felt refreshing yesterday against the heat and humidity that blanketed the beach, Monday night tea in the Pines was far more tolerable than on Saturday and a good friend arrived for a two day visit. One arguably odd observation of note, however, from the past weekend is the increased police presence in Cherry Grove for the Fire Island Blackout.

Thousands of LGBT people of color descend upon the beach for this annual beach party. Elaborate tents complete with table settings and even live fish (yes, it is true!) dot the Grove's beach. And the eye candy is admittedly amazing! One employee anecdotedly told me FIBO is among the best groups with which she works. The fact three Suffolk County Marine Bureau boats were docked on Saturday night, more than half a dozen SCMB officers patrolled the Grove's boardwalks--at a time many Fire Islanders continue to complain about the lack of law enforcement officials on the beach--and at least two businesses categorically banned bags from their establishments, however, left this blogger and reporter scratching his head a bit.

This observation is not meant to imply any of the businesses and SCMB officers in the Grove are racist in any way, shape or form. It is obviously necessary to have sufficient policing and other measures in place to ensure everyone on the beach enjoys themselves without incident. The above observations, however, are included merely to outline what this blogger and reporter saw over the past weekend... and readers can draw their own conclusions.

Posted by Boy in Bushwick at 9:25 AM 1 comments

After a seemingly endless stretch of cool and rainy weather, summer has finally arrived in New Hampshire.

I've spent the last few days visiting my family ahead of my 28th birthday. I followed the Canadians and gays to Ogunquit yesterday before I had coffee with a college friend in downtown Portsmouth. And I even languished under a categorically dreadful drag queen's schtick at a downtown Manchester gay bar with a state representative and his partner. I leave for Boston (and my eventual return to New York) later this morning, but I must say this trip to New Hampshire has been rather enjoyable. 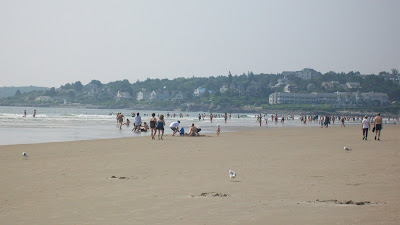 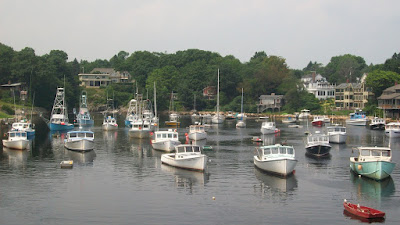 Activists and religious leaders in New York, Washington and across Israel continue to gather to mourn the two people a gunman shot and killed at a Tel Aviv LGBT center on Saturday night.

“We gather here tonight to mourn, to remember, and to make a promise. Here tonight, we mourn the inextricable reality of hate," Mark Pelavin, associate director of the Religious Action Center of Reform Judaism, said at a Washington vigil earlier tonight.

"We mourn the persistence of apathy in the face of intolerance. But above all, we mourn the loss of two young Israelis who, while seeking love and support, were met with terror and violence."

"Saturday's shooting at the LGBT Youth Center in Tel Aviv was a shocking and horrendous hate crime," she said in a statement that announced a vigil to be held on Wednesday at Congregation Beth Simchat Torah in Manhattan. "My condolences go out to the family and friends of those who were taken too soon by the hand of hate, and my thoughts and prayers are with those still fighting for their lives."

Liz Trobishi and Nir Katz's murders are certainly an outrage that should motivate all fair-minded people to stand-up and proclaim loudly and with conviction anti-LGBT violence is completely unacceptable. The attack in Tel Aviv was also not only an attack against LGBT Israelis, but against those of us in Baghdad, Beirut, Boston, Bushwick and around the world. Our community has certainly made significant strides in recent years, but this attack provides yet another stark reminder we must double our resolve to ensure these tragic incidents of hate-fueled violence become a thing of the past.

Posted by Boy in Bushwick at 9:51 PM 0 comments