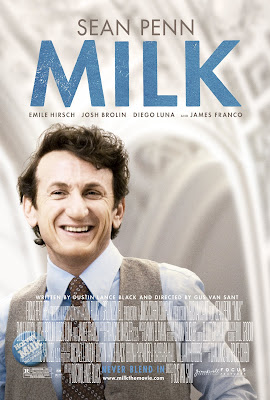 As the economy continues to fall into a deeper recession and a steady stream of bad news continues to garner headlines around the world, last night's Academy Awards arguably provided some much needed relief from the doldrums in which many people currently find themselves. I watched the Oscars at a friend's apartment in Manhattan before I headed back to Brooklyn, and I must confess Sean Penn's courageous and all too necessary decision to publicly call out Proposition 8 supporters and "Milk" screenwriter Dustin Lance Black's acknowledgement of gay and lesbian young people and his own struggle to come to terms with his sexual orientation left a lasting impact.

Those within the movement for LGBT rights almost immediately praised the two men.

"GLAAD applauds those who have brought the important story of Milk to so many millions of people, and congratulates Dustin Lance Black and Sean Penn for their well-deserved Oscar wins," Gay and Lesbian Alliance Against Defamation President Neil G. Giuliano said in a statement. "They are to be commended for telling a story that has the power to inform future generations about the history of our community and our struggles for equality. Through Sean Penn's own connection with the character, he was able to give audiences the opportunity to learn more about Harvey Milk's lasting influence on our movement and our community."

Chuck Wolfe of the Gay and Lesbian Victory Fund agreed.

"We offer our deepest thanks and congratulations to Sean Penn and Dustin Lance Black," he said. "Their extraordinary work on the film 'Milk' is richly deserving of the Academy Awards bestowed on them this evening. Harvey Milk's legacy is about facing fear and finding courage, which is something LGBT candidates do when they decide to run for office. Sean and Dustin did the same thing when set out to make this extraordinary film, and we are very grateful for that."

Some LGBT activists have criticized "Milk" for the way they feel the film either glamorizes the late-San Francisco supervisor's rise to power or overlooks key details of his life. These positions are valid, but the fact remains "Milk" brought
the story of a gay pioneer whose life was cut tragically short to millions of people. He trail blazed the path upon which those within the movement for LGBT rights and their supporters continue to walk. And Sean Penn's brilliant portrayal of Harvey Milk and his anti-Prop 8 comments last night will almost certainly recruit more soldiers to advance the cause for equal rights and justice for LGBT Americans