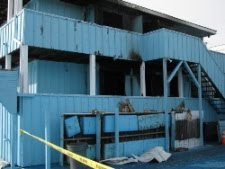 A fire damaged more than a dozen rooms of a Cherry Grove hotel early Tuesday morning.

Sources told Boy in Bushwick the blaze broke out inside a housekeeping shed along the north side of the Grove Hotel shortly after 1:30 a.m. Firefighters from across Fire Island--the Grove, the Fire Island Pines, Point O' Woods, Ocean Bay Park, Ocean Beach and Saltaire--and Sayville on Long Island responded to the scene.

"The north end of the hotel is completely burned down," he said.

A second fire broke out in the Grove shortly before the hotel erupted into flames. There is nothing to indicate the two incidents are connected. Investigators have yet to determine a cause, but the fire has certainly left those who work in the Grove Hotel and adjacent Ice Palace and local residents shaken.

"I hope to see the Hotel repaired and ready for operation by the beginning of next summer," Grove resident Jim Kelly said.

The complex is scheduled to close for the season on Sunday. Peña-Sierra said he remains confident the hotel's owners can rebuild the damaged rooms over the winter.