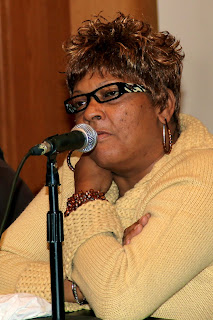 Roxanne Green spoke emotionally, passionately and even angrily as she talked about her murdered daughter LaTeisha at a forum at the Brooklyn Law School on Oct. 7.

“You would have liked LaTeisha—she was very outgoing,” she said. “She was like the energizer bunny.”

An Onondaga County jury convicted Dwight DeLee in July of first-degree manslaughter as a hate crime and criminal possession of a weapon after prosecutors accused him of shooting Green and her brother Mark Cannon last November as they and a friend sat in a car outside a Syracuse house party. Initial media reports indicated DeLee targeted Green because he thought she was gay. She was actually transgender.

New York State does not include gender identity and expression in its hate crime statutes, but prosecutors constructed what Michael Silverman, executive director of the Transgender Legal Defense and Education Fund, described as a “narrative Teish was gay or lesbian to achieve a conviction.” A judge sentenced DeLee in August to 25 years in prison, but Roxanne Green said she feels the sentence was too lenient.

"He shouldn't see another day on the street," she said.

Cannon added he decided to participate in the panel because he did not “want to see another family go through what our family has gone through.”

“We lost someone very important to us,” Cannon said.

LaTeisha Green’s death was among a series of anti-LGBT violence and bias crimes that have taken place across New York State over the last year. Keith Phoenix and Hakim Scott allegedly beat Ecuadorian immigrant José Sucuzhañay to death on a Bushwick street corner last December because he thought he was gay—he and his brother Romel were arm-and-arm as they walked home from a nearby bar. Trinidad Tapia and Gilberto Ortiz allegedly severely beat Leslie Mora with a belt buckle as she walked home from a Jackson Heights nightclub in June. And a group of assailants attacked Carmella Etienne with rocks and empty beer bottles as she walked home from a store in St. Albans on July 8.

“I was pretty much scared for my life,” Etienne recalled as she described how nobody came to her assistance while the men attacked her. “I felt like nobody cared. It happened in my neighborhood.”

The National Coalition of Anti-Violence Programs reported earlier this year violence against LGBT people has increased 24 percent since 2007. The NCAVP further reported 29 known bias-related murders in 2008; the highest rate since 1999.

Sharon Stapel, executive director of the New York City Anti-Violence Project, attempted to link how she and her organization feel race, immigration status and other socio-economic factors can motivate anti-LGBT violence and bias crimes in her response to Sucuzhañay’s death.

“We at the Anti-Violence Project know too well that many people continue to be victims of violence because of their identity—whether that violence is a result of hatred of race, ethnicity or sexual orientation,” she said in a Dec. 8, 2008, statement.

Andy Marra, a senior media strategist for the Gay & Lesbian Alliance Against Defamation, who worked with Silverman and LaTeisha Green’s family after her murder and during DeLee’s trial, pointed out what she described as additional challenges she and others who worked on LaTeisha Green’s case encountered. These include how law enforcement respond to anti-LGBT hate crimes and other bias attacks and how the media covered the murder.

“Media is not talking about what it means to be transgender—or gender variant,” Marra said.

More than 30 editors, reporters and other media professionals from the Syracuse area attended a training in April on how to cover LaTeisha Green, her death and DeLee’s then-pending trial. Marra stressed the importance of what she feels is the need to use gender-appropriate pronouns, chosen names and overall sensitivity.

“Its conversations like that I have on a daily basis,” she said. “It’s a learning process for them.”

Silverman further stressed a more general problem he encounters is a reluctance among many police departments and prosecutors to adequately pursue anti-trans hate crimes and bias-motivated attacks.

“Too many of these cases don’t get the attention like LaTeisha’s case did because of a lack of response,” he said. “Sometimes it’s us banging pots and pans and saying to make this a top priority.”

Silverman and Cannon both applauded the Onondaga County District. The Empire State Pride Agenda, TLDEF and other LGBT advocacy organizations have repeatedly used LaTeisha Green’s murder to call for the inclusion of gender identity and expression to both New York and federal anti-hate crime and discrimination laws. Roxanne Green stressed, however, her and her family’s pain continues to run very deep.

“I don’t know if it will get any easier,” she said.