A Campaign Fleece for All 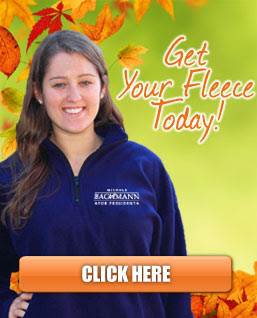 It is undoubtedly campaign season when presidential candidates begin to offer fleece to anyone who supports their White House aspirations.

"As the sun begins to set earlier and the air has that wonderful autumn crisp in it, our campaign would like to offer you an exclusive way to show your support," wrote Minnesota Congresswoman Michele Bachmann in a fundraising appeal that her campaign sent to supporters earlier today in which she blasts President Barack Obama over the country's sluggish economy. "We have designed a 'Bachmann for President' fleece jacket to offer you as special gift if you make a donation of $75 or more to my campaign today. This is an exclusive fleece you can wear throughout the fall to show you stand for constitutional conservative values and support our campaign for president."

Not to be outdone by the Tea Party firebrand, former Massachusetts Gov. Mitt Romney's campaign is offering "an official Romney 2012 fleece pullover" to anyone who donates $60 or more to the campaign.

"Support Mitt in style while you're out at campaign rallies, phone banks, or watching the debates," wrote Zac Moffatt, digital director of the Romney campaign, in a pitch to supporters earlier on Wednesday, Oct. 26. "Remember that all purchases from the store are also donations to the campaign. So not only can you wear your support on your sleeve, but you'll also help provide the much-needed resources to defeat Obama and his failed policies in 2012."

With snow expected to fall across most of New Hampshire on Thursday, Oct. 27, these pullovers and jackets could quite possibly prove more than a seasonal gimmick to pad campaign coffers. The first-in-the-nation presidential primary is less than three months away for anyone who's counting!