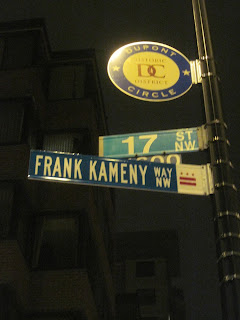 Longtime LGBT activist Frank Kameny passed away in his Washington, D.C., home late on Tuesday, Oct. 11. He was 86.

Metroweekly reported that Kameny, who founded the Mattachine Society of Washington in 1961 after he was fired from his job at the Army Map Service four years earlier, passed away in his sleep.

“Frank Kameny led an extraordinary life marked by heroic activism that set a path for the modern LGBT civil rights movement," said Human Rights Campaign President Joe Solmonese. "From his early days fighting institutionalized discrimination in the federal workforce, Dr. Kameny taught us all that 'Gay is Good.' As we say goodbye to this trailblazer on National Coming Out Day, we remember the remarkable power we all have to change the world by living our lives like Frank--openly, honestly and authentically.”

“The death of Frank Kameny is a very sad day for those who believe that all people in this country should be treated fairly. No one in our history had a longer record of commitment to and leadership of the fight for civil rights for all. When he was himself the victim of discrimination decades ago, unlike almost every other victim of the homophobia that then pervaded the country, Frank Kameny fought back. His courageous, creative assault on bigotry is one of the rocks on which the movement for LGBT rights is founded, and the successes we have had in recent times owe a great deal to him," he said. “All of us who are continuing the fight will remain indebted to him, inspired by him, and regretful that we will no longer have the benefit of his advice, his encouragement, and perhaps most importantly, his impatience.”