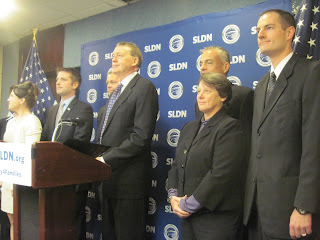 A group of gay and lesbian servicemembers filed a lawsuit challenging the federal Defense of Marriage Act in federal court in Boston on Thursday, Oct. 27.

The Servicemembers Legal Defense Network and Chadbourne and Parke held a press conference with the six active duty servicemembers and two veterans at the National Press Club in Washington, D.C. The plaintiffs argue that DOMA forces the military to deny their spouses access to bases, burial rights at national cemeteries and other benefits that heterosexual servicemembers' spouses automatically receive.

"The case we are bringing today is about one thing, plain and simple: It’s about justice for gay and lesbian servicemembers and their families," said Aubrey Sarvis, executive director of the Servicemembers Legal Defense Network. "These couples are in long-term, committed and legally recognized marriages and the military shouldn’t be forced to turn their back on them because the federal government refuses to recognize their families."

The repeal of the Pentagon's ban on openly gay and lesbian servicemembers became official on Sept. 20.

The Obama administration announced earlier this year that it would no longer defend DOMA in federal court, but House Republicans continue to back the Clinton-era law. The Senate Judiciary Committee is scheduled to begin debate on a DOMA repeal bill on Nov. 3.