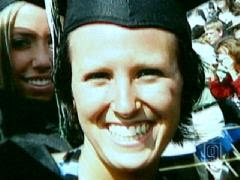 Growing up in Southeast Manchester [N.H.] throughout the 1990s, Michelle Morse was a familiar face. We rode the bus to school each day. We shared many of the same teachers. Our mothers attended Pop Warner cheerleading competitions across the state. I moved in New York upon graduation from the University of New Hampshire in May 2004, but news of her death from cancer in November 2005 hit me as a complete and utterly painful shock.

Doctors diagnosed Michelle with cancer during her junior year at Plymouth [N.H.] State University. She faced the agonizing decision of losing her health insurance coverage if she curtailed her studies because of her illness. Michelle chose to remain enrolled at PSU while embarking upon a brave and valiant fight against the disease. And her mother AnnMarie became a tireless advocate on her behalf and in support of those college students who must confront such an unfortunate and utterly unnecessary decision.

New Hampshire Gov. John Lynch signed a bill known as "Michelle's Law" in January 2006, and members of the Granite State's Congressional delegation have introduced it in Washington. The U.S. House passed "Michelle's Law" yesterday in a move that represents a significant step forward in AnnMarie's effort to ensure nobody else has to endure the pain with which she and her family continue to deal. The bill also attempts to guarantee college students will never again have to face the cruel choice of risking the loss of their health insurance if they decide to curtail their course load to fight a serious illness.

The American health care system remains one of this country's most scandalous and disgraceful elements. "Michelle's Law" represents a direct challenge to a system that has failed countless millions of Americans. Michelle's legacy will continue to live on through her example and her mother's undying advocacy. I have no doubt she has a smile on her face tonight as she looks down upon the lawmakers in Washington who did the right thing yesterday. May you continue to rest in peace Michelle!