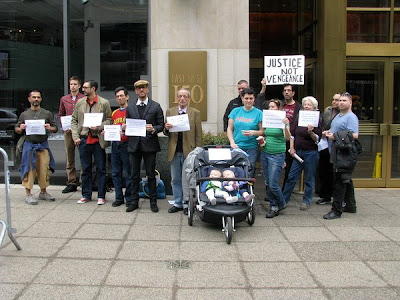 Roughly two dozen people gathered outside the Spanish consulate in Manhattan on Saturday to protest the acquittal of a man who confessed he stabbed a gay couple to death inside their apartment before he set it on fire.

Jacobo Piñeiro Rial stabbed Isaac Ali Dani Peréz Triviño, 27, and his boyfriend Julio Anderson Luciano, 32, to death inside their apartment in the Galician city of Vigo on Jan. 13, 2006. Blog and media reports Rial stabbed the couple 57 times before he took a shower, threw clothes on the floor and eventually lit the apartment on fire to cover up the crime.

Rial reportedly confessed to a bartender he murdered the two men after a television station broadcast a bulletin about the murder and fire. Police arrested him two days later.

Rial's lawyer told a Galician jury his client merely defended himself after Luciano threatened him with a knife after he refused to have sex with him. Rial's counsel further argued Triviñio also threatened his client with a knife. And he also contended a two-day alcohol and cocaine binge had impaired Rial's judgment.

The jury convicted Rial for setting fire to the couple's apartment. He faces up to 20 years in prison, but Triviñio's mother, who lived with her son and Luciano, described the verdict as "homophobic, racist and brainless."

The Manhattan demonstration coincided with several that took place in Spain in response to Rial's acquittal. More than 1,000 people took to the streets of Vigo on Saturday to express their outrage over the jury's decision. Similar protests also took place in Barcelona, the Basque Country and Madrid.

Wow. Awful story. But its actually heartening to see so many people in Spain and even hear willing to stand up to this verdict.