Started to write at 3:58 p.m. on Sunday, Aug. 29, during Ariel Sinclair’s pool show at the Ice Palace in Cherry Grove.

It’s a warm late August afternoon here in Cherry Grove. A rowdy crowd is hooting and hollering at Ariel Sinclair as she and her girlfriends perform at the weekly Sunday afternoon pool show here at the Ice Palace. A woman with a 22-year-old son just overwhelmingly won a rather ad hoc modeling contest. And Brittany Taylor just jumped into the pool (and a particularly good Samaritan just retrieved her neon pink wig.)

The last issue of the Fire Island News for this summer (Sinclair is less than 10 feet away from me performing some twisted number to prove her womanhood.) hit the beach on Thursday, Aug. 25, and I confess I am a little fried. The end of August can prove a breaking point for some who work on Fire Island (Sinclair just announced someone complained about the noise and Logan Hardcore is now performing Beyonce’s “Crazy in Love”.), but the show must go on as Sarah Ferguson told Oprah earlier this year after she offered access to her ex-husband to a tabloid reporter for £500,000.

In addition to delivering newspapers in Atlantique, Sailors Haven, the Grove, the Fire Island Pines, Davis Park, Watch Hill and Ocean Beach on Thursday, this weekend included Daniel Nardicio's underwear party at the Ice Palace, two late night walks from the Grove to Ocean Beach, an interview with U.S. Sen. Kirsten (Hardcore just jumped into the pool.) Gillibrand (Sinclair is once again trying to prove her womanhood with her final number with Hardcore, Taylor and Brandon Cutrell.), schlepping through shin-deep water on Bay Walk in Ocean Beach, shooting clips of Hurricane Danielle-generated surf and packing up nearly four months of memories. (And the pool show is now done.) Here are three observations and notes from the previous few days.
- Personal integrity does not always spring eternal on Fire Island.
- The fried clams and French fries at Nicky’s, which is across from the Fire Island Ferries terminal in Bay Shore, are the perfect way to start any trip to the beach.
- The Long Island Railroad should seriously consider placing attentive personnel on train platforms the next time a switch fire causes major disruptions so confused passengers, such as myself, can actually figure out where they can catch their trains and/or whether they are actually on the correct one. The LIRR employees at the Babylon station on Wednesday, Aug. 25, should particularly take note of this rather obvious consideration. 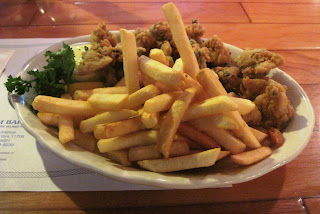 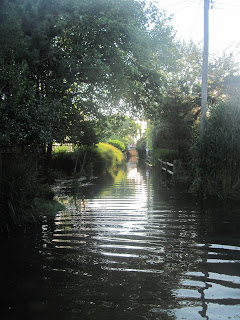 Flooding on Bay Walk in Ocean Beach on Thursday, Aug. 25. 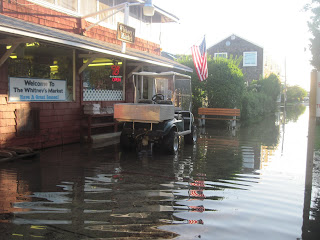 Flooding around Whitney's Market in Ocean Beach on Thursday, Aug. 25. 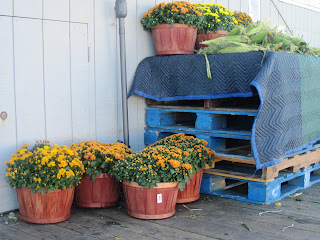 A sign of the impending change in seasons at the Pines Pantry. 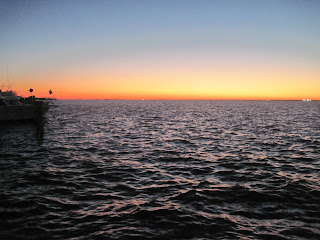 Twilight from the Cherry Grove dock on Friday, Aug. 27. 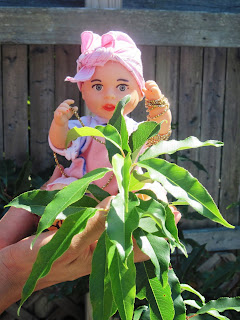 Miss Mole in the Grove. 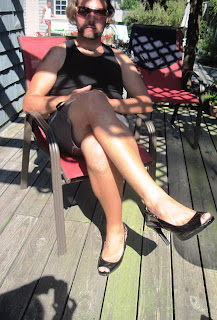 Trying on some pumps in the Grove on Saturday, Aug. 28. 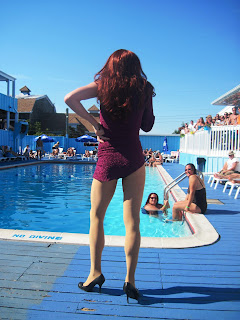 Dallas Dubois works the crowd at her and Logan Hardcore's weekly pool show on Saturday, Aug. 28.