Does the Occupy Movement Have Clearly Defined Goals? 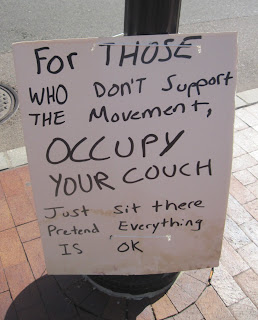 Does the Occupy movement have clearly defined goals?

I continuously asked myself this question as I walked around the Occupy Boston encampment on the Greenway outside South Station on Monday, Oct. 17. The anger and frustration towards Wall Street, corporate America, the federal government, the police and even the media was certainly palpable. Occupy Boston organizers have even begun to organize General Assemblies and caucuses that clearly indicate they have no intentions of leaving Dewey Square. As impressive as these efforts are, the question remains whether they are enough to effectively captivate an angry electorate ahead of the 2012 elections?

Occupiers certainly have justifiable grievances against corporate greed and the political system that continues to disenfranchise the vast majority of Americans. The democratic traditions upon which this country was built continues to allow the Occupy protestors to air them, but it remains to be seen whether the movement will achieve more than providing a colorful snapshot du jour of an increasingly frustrated, angry and polarized country.

It's a super great picture you found there.

Yeah, don't pretend it is Ok.

The general goal of the Occupy Movement might be:

let's just not do this anymore. Nobody really wants this.
The world can be a FUN place to live. If we just stop going for the money and start going for results, value.