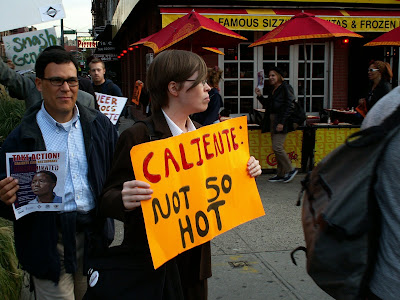 Less than a week after lesbian New Yorker Khadijah Farmer filed a lawsuit against Caliente Cab Company in response to a male bouncer who kicked her out of the women's bathroom for being 'too masculine,' more than 50 people converged on the popular West Village eatery to protest the way the restaurant allegedly treated her. Farmer maintains she, her girlfriend and their friend were kicked out of Caliente Cab Company despite her repeated attempts to reassure the bouncer she is actually a women. This incident allegedly happened hours after more than 500,000 people attended the city's annual Gay Pride parade. The restaurant maintains it did nothing wrong but a growing chorus of activists beg to disagree... stay tuned!