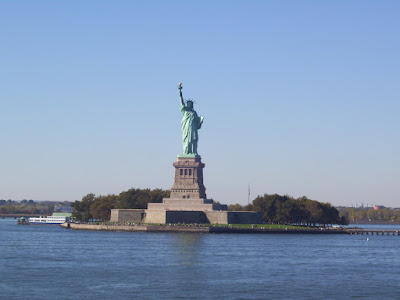 Lady Liberty on a beautiful October afternoon in New York 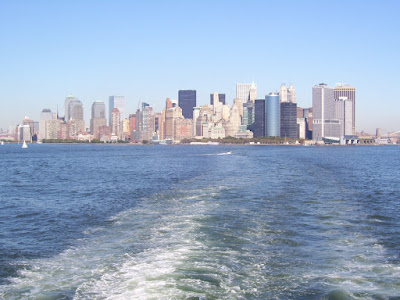 The weather remains unseasonably warm here in Bushwick (it's 68 degrees as I write at 11:15 a.m.). My friend Enrique and I went to the Statue of Liberty via the Staten Island Ferry yesterday. I went to the Union Square farmers market on Saturday morning and later rapped 'Tennessee' with a former GLAAD colleague and his friends in the East Village. I should now probably blog about something a bit more profound now that I've bored you all with news of my weekend in the city!

Republican presidential candidates once again tried to pander to social conservatives at the Family Research Council's so-called Value Voters Summit in Washington this weekend. J.K. Rowling outed Dumbledore during a New York appearance on Friday night. Polish Prime Minister Jaroslaw Kaczynski lost his re-election bid on Sunday after voters endorsed Donald Tusk of Civic Platform. All of these news events prove yet again LGBT issues remain squarely in the mainstream. The New York gay set can certainly shop for Marc Jacobs goulashes in the West Village on a beautiful Sunday afternoon in October. Two good friends can traverse the East Village on a Sunday night in search of a perfect 40th birthday party venue for a well-known playwright. I can gossip with my roommate about reactions to my reporting... but the impact world (and local) events have certainly provide this blogger and others with fodder about which to write outside of the seemingly mundane details of our lives.