It's nearly 5:20 a.m. and I just filed my election story for EDGE about local reaction to Barack Obama's historic election as the country's next president. It frankly all seems so surreal. I spent the night at the LGBT Community Center in Greenwich Village, Room Service in Gramercy and finally in Times Square with thousands of eccstatic New Yorkers and others from around the world.

Fellow reporter Michael Luongo and I knew the cheers and honking horns we began to hear as we walked up Sixth Avenue in Chelsea meant Obama had secured enough electoral votes to win the White House--and my friend Paul in Boston confirmed it with a phone call a couple of minutes later. Reporters are trained in journalism school to remain objective in their coverage and to provide fair and balanced coverage of all sides of a story. Tonight was different.

I became emotional as I watched Obama make his speech in Chicago. I joined others inside Room Service who began to clap for a man who is now the first man of color elected to the White House. And at one point all I could do was put my arm around my Fire Island News columnist Bruce-Michael Gelbert and soak in the moment with tears in my eyes.

The election not only represents an arguable bold exclamation point to end Bush Republicanism, but it amounts to what many hope is a monumental change in American politics and the United States. Those changes will make themselves known in the coming weeks, months and years, but the majority of Americans will arguably wake-up proud of the monumental step forward their fellow citizens took by electing Obama as their next president. Tisha Riley of Crown Heights, right, watches the results trickle in at the LGBT Community Center in Greenwich Village with friend Mo George 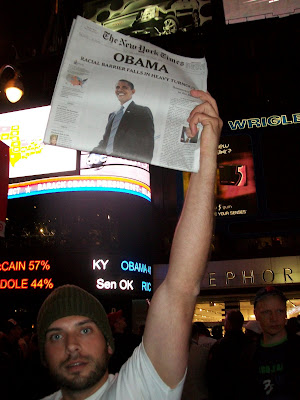 New York Times captures the mood of many in Times Square

Thanks for the mention in your write-up of Election Night. It was good to be with you as we received the happy news of that night.
xxx's
Bruce-Michael