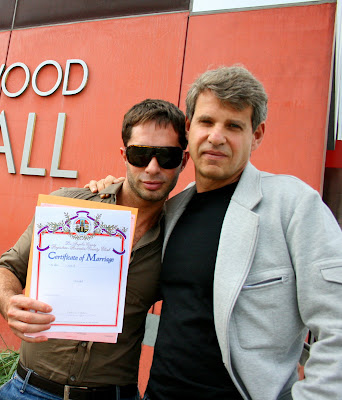 Fire Island Pines residents Michael Lucas and Richard Winger certainly know how to make a statement. And this fall it included a very political love story… their wedding.

The couple said they decided to tie the knot in California because New York does not recognize marriages for same-sex couples performed in the Empire State. Lucas and Winger added another reason for their decision is to draw attention to Proposition 8, an amendment to the state Constitution that sought to ban nuptials for gays and lesbians.

Voters approved Prop 8 by a 52 to 48 percent margin. Marriages for same-sex couples had been legal in California since June, and Prop 8 put a stop to them in the Golden State.

Lucas and Winger’s wedding doubled as a fundraiser for Equality California, a statewide LGBT advocacy organization, and it’s “No On Prop 8” campaign in the days leading up to the election.

"Of course our decision to get married is politically motivated," Lucas told the News in an e-mail. "We could have gotten married at any time in the past eight years…, but I think it's particularly important to do it now because of Proposition 8."

Lucas and Winger are the latest in a series of high profile gay and lesbian couples to marry in California ahead of Election Day. Ellen DeGeneres married Portia de Rossi at their Beverly Hills home in August, while “Star Trek” star George Takei married his long-time partner Brad Altman in Los Angeles in September.

Lucas was quick to condemn the vote—and especially those who supported Prop 8.
“California is full of rednecks and gay people should have fought more fiercely,” he said. “Unfortunately, the Christian right got more money for their ugly ads and conservatives got their way.”

The couple plans to celebrate their marriage at a gathering in New York later this month. Lucas added he feels Prop 8’s passage may provide a silver lining for activists in New York.

“On the brighter side, Democrats in New York won the state Senate,” he said. “What we lost on the West Coast may be a gain for the East.”