Thousands of people took to the streets of Manhattan's Upper West Side tonight to protest Proposition 8 and the role they feel the Mormon Church played in its passage. Organizers estimated more than 10,000 people marched down Broadway and on surrounding streets shortly after 7 p.m., but some observers said more than 16,000 turned out. Attached are pictures and a video taken during the peaceful march. 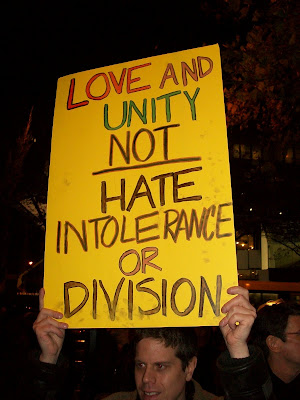 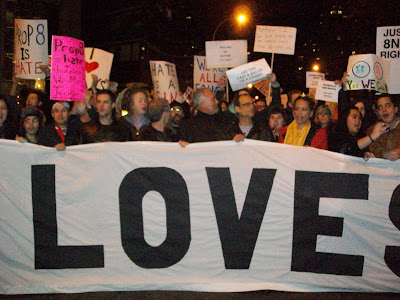 My friend Andres Duque has also posted an account of tonight's protest on his blog Blabbeando.

thanks for showing the world some gay PRIDE from NYC! you all are so beautiful. i love the pics and video. keep up the fight, and let's demolish the democratic party hacks at HRC who have done so much damage to our liberation.

No offense to you Michael, because what you said was very positive and I agree with you on your HRC comment. However, this isn't about being proud - this is about getting and securing the rights we deserve, and being treated accordingly.

I was very happy to be a part of this yesterday.

Here is a link to some images that I captured from last night's march:

From West Hollywood, CA, a big THANK YOU to New York. Let's gear up for Saturday!

From Hollywood, my family's thanks. My husband and I were married on June 17. Our children are 3 and 7. They are featured in this YouTube spot I ran before the election, pointing out the plight of children of GLBT families if Prop 8 passed. I became and activist in NY in the late 80s with ACT UP. Nice to see the spark is still alive there.

From San Diego - New York, you are amazing! This is not just a California issue, this is an American issue. I am so proud of our brothers and sisters - gay, straight, and everything in between - coming together like we are. What is happening is momentous, and if we keep it alive, we are going to be a part of one of the broadest, mobile, and fast acting civil rights movements in the history of the nation.

My friends and family thank you for acting. Its time we all did.