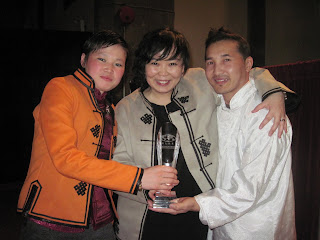 Bushwick is probably as far away from the Mongolian steppe as one can get, but Anaraa Nyamdorj of the Mongolian LGBT Centre had one of the best sound bites this cynical journalist has heard in a long time when she accepted the International Gay and Lesbian Human Rights Commission's Felipa de Souza Award at Landmark on the Park in Manhattan on Monday, March 7.

“Long ago, our warriors conquered half of the world,” she said. “Now our warriors will go and conquer hatred. We are fierce and determined.”

IGLHRC also honored journalist Jeff Sharlet for his reporting on the links between The Fellowship and Uganda’s so-called Anti-Homosexuality Bill that would impose the death penalty upon anyone found guilty of repeated same-sex sexual acts.