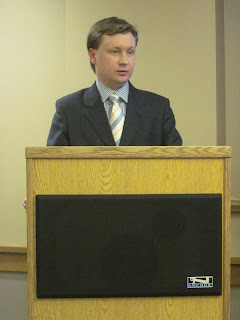 Alekseev appeared amid controversy over anti-Semitic comments he reportedly posted to his blog in late January. Karen Ocamb of LGBT POV reported earlier today organizers of Alekseev's scheduled appearances in California later this week canceled them after the activist refused to clarify his positions.

It remains somewhat unclear whether Alekseev will travel to California after all, but he denied he is anti-Semitic. Alekseev pointed out his mother's stepfather was Jewish, and he said he has many Jewish friends. Alekseev further praised the gay and lesbian Jewish Americans who have supported Moscow Pride over the years.

(David Badash has an extensive post on Alekseev's appearance and the controversy over his reported anti-Semitic comments at The New Civil Rights Movement.)