As I think of how to reflect upon the year that has almost come to a close, there is an arguable sense of irony and even unbridled cynicism in the “optimistic tone” under which I wished “everyone a happy, healthy and prosperous 2009” in my Dec. 30, 2008, posting. This year certainly proved to be an exciting, yet tumultuous one for this boy in Bushwick. And while I am certainly no worse for wear, here is a look back at 2009.

President Barack Obama became the country’s 44th president on Jan. 20. His inauguration took place amid the worst economic crisis the United States has seen since the Great Depression, but he came into office under (arguably unrealistic) expectations he would immediately resolve the country’s many problems.

Nearly a year later, the administration has increased the number of troops on the ground in Afghanistan, enacted an economic stimulus package that has arguably stabilized the American economy and has nearly achieved some form of long overdue health care reform. Obama has also made some overtures to LGBT Americans—the inclusion of sexual orientation and gender identity and expression to federal hate crime statutes and the end of the ban that had prevented people with HIV/AIDS from entering the country. Many, however, continue to argue the administration can continue to do more.

I covered Obama’s inauguration for EDGE and WNYC at the LGBT Community Center in Manhattan. It was a bitterly cold January day, but those who gathered on West 13th Street could barely contain their hope and optimism (and distain for former President George W. Bush and former Vice President Dick Cheney.) Obama’s inauguration certainly does not erase the historical injustices underrepresented groups had (and continue to) suffer, but it remains a monumental turning point in American history. 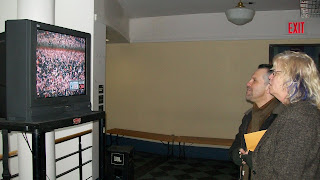 Even though the economy continues to show some signs of recovery, 2009 proved extremely difficult for journalism.

Genre, HX and the New York Blade are among the local LGBT publications that folded earlier this year. And Window Media’s insolvency last month sent shock waves through an already vulnerable industry. A lesbian reporter noted this month there were only a handful of us—reporters who work for LGBT-specific publications—who covered the ceremony at which Gov. David Paterson signed an executive order to ban discrimination against transgender New York State public employees. A very sobering thought indeed! 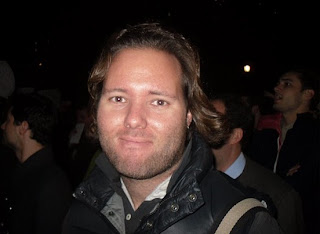 On assignment in Union Square earlier this month. [Photo courtesy of Joe Jervis]

Some of the most difficult stories to cover are those that involve victims of anti-LGBT hate violence. And Jack Price, José Sucuzhañay and Jorge Steven López Mercado are among those who dominated a significant portion of my 2009 reportage.

Daniel Aleman and Daniel Rodriguez, Jr., allegedly used anti-gay slurs as they nearly beat Price to death outside a College Point deli in early October. Police took Hakim Scott and Keith Phoenix into custody in late February in connection Sucuzhañay’s murder near a Bushwick street corner in Dec. 2008. And Juan A. Martínez Matos confessed he stabbed López to death on Nov. 13 before he dumped the gay teenager’s decapitated, dismembered and partially burned body along a remote Puerto Rican roadside.

These brutal attacks and others sparked outrage among LGBT activists and their supporters around the country (and world.) They also ignited sometimes passionate debate among those who wanted to claim these victims as their own. The fact remains, however, anti-LGBT hate crimes remain a serious problem that legislation alone will not solve. And I truly look forward to the day when I will not have to continuously report on these atrocities.

The push for marriage for same-sex couples continued in earnest in 2009, and activists’ efforts produced mixed results.

The California Supreme Court in May upheld Proposition 8 that overturned the state’s law that had allowed gays and lesbians to marry. Maine voters in November approved a referendum that struck down the Pine Tree State’s law that had allowed nuptials for same-sex couples. And the New York State Senate struck down a measure earlier this month that would have allowed gays and lesbians to marry.

Conversely, gays and lesbians began to legally marry in Iowa in April and in Vermont in September. The District of Columbia extended marriage to same-sex couples earlier this month. And New Hampshire will allow gays and lesbians to tie the knot on Jan. 1.

An argument can certainly be made the country is simply not ready to accept marriage for gays and lesbians. This hypothesis does not denigrate the efforts of activists who continue to push the issue at the state and even federal level, but it is merely a stark realization based upon the series of defeats listed above. That said; my friend Paul and I will be among those who will attend New Hampshire Rep. Bob Thompson and Michael Jacobsen’s wedding in my hometown on Saturday. I honestly never thought I would see the day a gay couple could legally tie the knot in Manchester—a city from which I moved away more than five years ago. Progress indeed appears in the seemingly least likely of places. 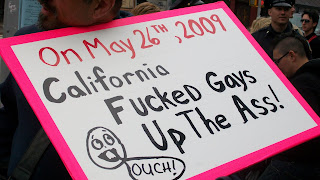 The California Supreme Court upheld Prop 8 in a May 26 ruling.

For the personal and professional excitement and tumult 2009 brought, there were several hopeful and even inspirational moments of note. The so-called Miracle on the Hudson in January, my emergence as a talking head, Ascension Party, which was coincidentally my 28th birthday, in the Fire Island Pines and my new 34 inch waist line are among the happier moments from 2009.

Hope truly springs eternal, and I remain optimistic about the prospects of a new year and a new decade.