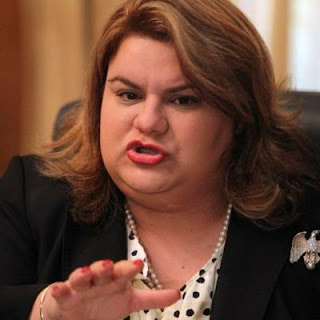 Puerto Rico House of Representatives President Jenniffer González announced on Monday, Dec. 5, that she would review a proposed provision to the penal code that would remove sexual orientation, gender identity and expression and ethnic ethnicity from the island’s hate crimes law.

“I have been very consistent about hate crimes,” she said, according to Primera Hora. “I have presented special laws against hate crimes that are there, so I am on the record about this topic.”

“For me, it was an error to eliminate these factors from the code,” she said, as el Nuevo Día reported on Tuesday, Dec. 6.

“When we take into account the horrific hate crimes that have occurred in recent years, this decision is even more egregious and nonsensical," said Mark-Viverito, who was born in San Juan. "The Puerto Rican government is creating a dangerous environment for those who have been and potentially could be attacked or even killed solely on the basis of their identity without any additional penalties for the perpetrators. This strategy to de-classify hate violence directed against LGBT Puerto Ricans and ethnic groups as a separate crime cannot stand."

Nearly two dozen LGBT Puerto Ricans have been murdered on the island since gay teenager Jorge Steven López Mercado’s decapitated, dismembered and partially burned body was found along a remote roadside near Cayey in 2009. With more than 1,000 reported homicides so far this year, 2011 has already proven to be the deadliest year in Puerto Rico.

Singer Ricky Martin added his voice to the growing chorus of those who oppose the proposed provision.

“All citizens are equal under the law and have, without exception, the right to equal protection under the law,” he wrote on his website, citing the United Nation's Universal Declaration of Human Rights

The House is expected to vote on the revised penal code later this week during a special legislative session.

The government (law makers) is supposed to protect the citizen...When they eliminate rights of their people is because they are not wise enough to continue in power. Their decision is a mirror of their internal hate toward the LGBT community. They need to remember that regardless the sexual orientation, the LGBT still are human beings, they need to be protected...The law-makers of P.R. need to meditate and remember that their brother, sister or son could also be part of the LGBT community.