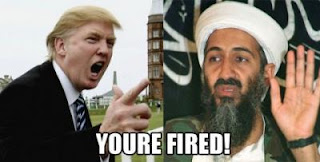 Should anyone care about the Donald’s political aspirations anymore?

A quick Google search this morning generated hundreds of articles, op-eds and blogs about the follicly challenged real estate mogul who apparently still has visions of becoming a serious presidential candidate. A Suffolk University poll found only eight percent of New Hampshire voters would vote for Trump in their state’s presidential primary.

“We’re not going to be able to solve our problems if we’re distracted by side shows and carnival barkers,” said President Barack Obama during a White House press conference on April 27.

The commander-in-chief obviously had far more serious things on his mind than questions about his citizenship and an ego-driven New Yorker who further stoked them. The birther movement is a trivial footnote that should remain in the dustbin of history, but Osama bin Laden’s death also pushed the Trump juggernaut out of the political headlines--Obama's announcement even pre-empted "Celebrity Apprentice" on Sunday night! And for that, Americans can truly rejoice!