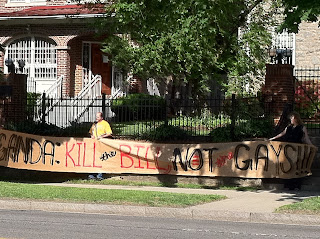 The Associated Press is reporting that Ugandan Parliamentarians have scrapped plans to debate the so-called "Anti-Homosexuality Bill" after an international outcry. Congressman Barney Frank (D-Mass.) had threatened to cut off aid to the East African country, while members of GetEQUAL protested outside the Ugandan embassy in Washington, D.C., yesterday afternoon. Amnesty International and Human Rights Watch also criticized the measure that had once called for the death penalty for anyone convicted of repeated same-sex sex acts.

"If adopted, a bill further criminalizing homosexuality would constitute a significant step backwards for the protection of human rights in Uganda," said Hilary Fuller Renner, a spokeswoman for the State Department's Bureau of African Affairs. "Respect for human rights is key to Uganda's long-term political stability and democratic development, as well as its public health and economic prosperity."

Note: It appears as though Ugandan lawmakers could vote on the "Anti-Homosexuality Bill" on Friday, May 13.