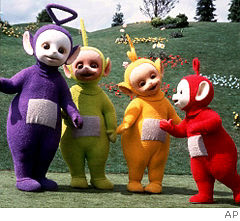 The Polish government has reportedly taken a page out of the late Rev. Jerry Falwell's playbook and launched a probe to investigate whether the popular children's cartoon 'Teletubbies' promotes homosexuality. Anti-gay politician Ewa Sowinska told a Polish magazine she remains concerned the program promotes homosexuality.

"I noticed (Tinky Winky) has a lady's purse, but I didn't realize he's a boy," the former Polish MP said. "At first I thought the purse would be a burden for this Teletubby... later I learned that this may have a homosexual undertone."

The idea Tinky Winky and his juvenile posse continue to promote homosexuality remains a laughable confirmation of the rampant homophobia within the conservative Polish government. The European Union and other human rights organizations continue to criticize the former Communist country for it's dismal record against its gay and lesbian citizens. It seems, however, some within the government want to distance themselves from Sowinska's homophobic stupidity. Parliamentary Speaker Ludwig Dorn reportedly said her comments "may turn her department into a laughing stock." This categorization has already become a reality.

Update: 365Gay.com reports today Sowinska has backed away from her initial claim to investigate the program. Her spokesperson told the Associated Press "We are not going to deal with this issue any more." Reason has triumphed over absurdity in this particular case. Perhaps the Polish government will think twice before it again embarks upon another foolish anti-gay crusade.