Homophobia remains widespread despite Russia's decriminalization of homosexuality in 1993. Luzhkov, who has repeatedly described gay Pride marches as 'satanic,' banned such gatherings in Moscow. Activists faced violent anti-gay protesters last year as they held their first march in defiance of the ban and of the authorities. The same situation played out again yesterday before the eyes of the world. Luzhkov, and to a greater extend Russian President Vladimir Putin, continue to disregard the rights of their own citizens. Activists within the European Union continue to call upon their own governments to challenge Putin on these continued abuses at next month's G8 summit in Germany. This weekend's violence remains a shocking reminder of the peril many Russians face within their own country. Their government continues to have blood on its hands as the world's media documented all too clearly. The European Union, the United States and other countries that claim to defend human rights and dignity must pressure Russia to protect all of its citizens. Their collective conscience mandates them to do so. 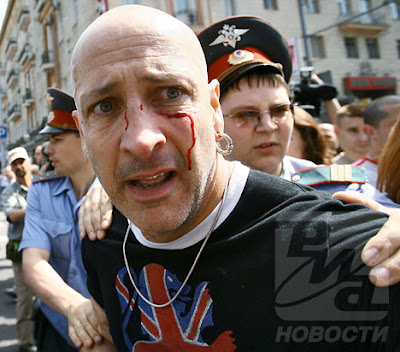