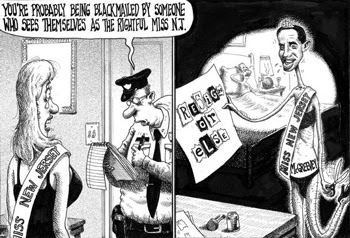 The New York Post once again solified its position as an 'equal opportunity offender' with its latest Sean Delonas cartoon.

Nobody in the movement for LGBT rights -- especially in New York -- should express shock that the New York Post continues to maintain its status as an 'equal opportunity offender.' The conservative tabloid struck yet again yesterday with a Sean Delonas pokes fun at the recent Miss New Jersey Amy Polumbo scandal with a cartoon which depicts former Garden State Gov. Jim McGreevey in a bikini, high-heels, tiara and sash holding a threat letter as a man in a bedroom waits in the background.

One can easily conclude Delonas' cartoons are tacky at best -- or outright offensive at worst. The Gay & Lesbian Alliance Against Defamation concluded the latter and issued an Action Alert to its constituency late yesterday. The Post published two Delonas' cartoons last October which poked fun at former U.S. Rep. Mark Foley [R-Fla.] and the New Jersey Supreme Court decision which led to the Garden State's civil unions law. Both cartoons depicted McGreevey and GLAAD responded after a flurry of complaints.

I was the organization's Northeast Media Field Strategist at the time and heralded many of these calls. I also brought these complaints to the attention of the Post to little avail outside a pledge to publish letters in a future edition of the Post. New York activists created GLAAD in 1985 in response to the tabloid's sensational coverage of people living with HIV and AIDS. One can argue it is refreshing to see the self-described media watchdog go after the Post. I fear, however, the tabloid's executives and even editors will not listen to an LGBT organization. LGBT New Yorkers will almost certainly call upon their brothers and sisters to boycott the Post. They will even criticize GLAAD for not being proactive enough in its approach to deal with the tabloid. Perhaps now is a time for the movement for LGBT rights to think outside of its narrow box as it strategies how to address this continued offense.