Progress on Gay Rights, But not AIDS 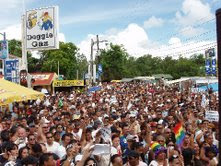 
This feature for EDGE focuses on the state of the movement for LGBT rights on Puerto Rico. I was frankly surprised to learn about the debate around marriage for same-sex couples which continues to take place on the Caribbean island. The lack of resources -- and bureaucratic red tape and even corruption -- to treat HIV/AIDS on Puerto Rico, however, remains a highly unfortunate disgrace to the shame of all those involved. Many Americans may not even realize the island is part of the United States. It lacks Congressional power but it maintains a bicameral legislature and a governor who functions in the same way as his colleagues do on the mainland. Puerto Rico Para Todos President Pedro Julio Serrano remains proud of the progress his homeland continues to make in terms of LGBT rights. Yet there remains much to be done as he and others both on the island and in the United States proper continue to raise awareness of the many issues which LGBT Puerto Ricans must combat.

Puerto Rico Para Todos President Pedro Julio Serrano beams with pride--and determination--each time he talks about his Caribbean homeland. He even brought this enthusiasm to Puerto Rican lawmakers charged with revising the American commonwealth’s civil code in April as he testified in support of marriage for same-sex couples.

Serrano, who works for the National Lesbian & Gay Task Force in New York, remains the leader of the small but growing movement for LGBT rights on the island. Serrano founded Puerto Rico Para Tod@s in June 2003 as a way to combat homophobia and to raise awareness.

The island, which, like the rest of Latin America is dominated by the Roman Catholic Church, was annexed by the United States since the Spanish-American War. Its status has been a sore point, with some wanting statehood, others independence, but the majority seemingly happy with commonwealth status. The political indefiniteness of the island extends to much of its attitudes, which veer between liberal Democracy and Latin absolutism.

Serrano’s work with Puerto Ricans is an integral part of the Task Force’s overall mission, he said. If anything, Puerto Rico Para Tod@s; focus has expanded. "At first it was about visibility and education and educating people about who we are... and now it’s about the political process," he told EDGE in a recent interview from his office in Lower Manhattan. "These are all steps towards justice for LGBT Puerto Ricans.

A handful of Puerto Rican politicians have begun to express their support for LGBT rights as Serrano and his allies continue to lobby local lawmakers. Attorney General Roberto Sánchez Ramos declared in March that denying gay and lesbian couples marriage licenses may violate Puerto Rico’s Constitution. Albita Rivera, a Democrat who represents San Juan in the Puerto Rican House of Representatives, the state Legislature’s lower house, became the first major local politician to march in an LGBT Pride parade last month. She joined thousands who attended festivities in the southwestern city of Boquerón.

Puerto Rico’s anti-hate crimes laws include sexual orientation and gender identity. The territory decriminalized homosexuality in 2005 and the University of Puerto Rico became the first governmental institution to prohibit discrimination based on sexual orientation the same year. The academic institution also extended benefits to partners of gay and lesbian employees.

Serrano proudly points to these events as proof that Puerto Rico continues to become a more accepting society. He concedes, however, that the majority of lawmakers on the island remain homophobic. He cites the influence that the Pro-Life Association of Puerto Rico’s President Carlos Sanchez and other social and religious conservatives continue to maintain.

"The most challenging thing locally is to convince politicians there is no political cost for being for fairness and for standing on the side of fairness," he said. "We have started to convey that, but we have not convinced politicians yet."

Activists on the island also suffer from a lack of financial resources. The NGLTF, the Gay & Lesbian Alliance Against Defamation and Freedom to Marry are among U.S. gay rights organizations that devote their time and resources to Puerto Rico. The New York-based Latino Commission on AIDS and the Puerto Rican Initiative to Develop Empowerment regularly use their connections with local activists and politicians to advocate in support of various issues on the island.

These organizations held a press conference at New York City Hall early last month to draw attention to the plight of hundreds of people with AIDS in Puerto Rico who routinely wait to receive essential medications and other treatments due to bureaucratic red tape and mismanagement of Ryan White Act funds. Puerto Rico has one of the highest percentages of people with AIDS in the United States

Latino Commission on AIDS Executive Director Dennis deLeon wrote a letter to Health Resources and Services Administration Associate Director for HIV/AIDS Dr. Deborah Parham in February to ask her to intervene on behalf of Puerto Ricans with AIDS.

"The situation is at such a crisis point where the well being of patients are being jeopardized," he wrote. "They are asking you to institute a system for dispersing funds via a respected third party... that completely bypasses the government which has proven unreliable to put it mildly."

PRIDE Chair Luis Robles said he and his organization, like many gay "Neuyorquinos" (New Yorkers of Puerto Rican descent), feel obliged to support Puerto Rican activists because of their close familial and cultural ties. He added he remains alarmed at the current situation on the island.

"There are waiting lists... hundreds of people lack medication," Robles said. "I feel very strongly [that] what happens on the island happens to me."

Lisbeth Meléndez-Rivera of the National Stonewall Democrats further described the waiting lists for HIV/AIDS medications as a disgrace. She was born and raised around Caguas in central Puerto Rico. Meléndez-Rivera added that like Serrano, she is motivated to support LGBT Puerto Ricans out of a sense of pride for her homeland and an obligation to support native efforts.

"For some of us like [Pedro Julio] and I who grew up there, it’s an issue of both national pride and concern for friends who live there," Meléndez-Rivera said. "There’s a symbiotic relationship that exists for those of us who live in the duality of Boricuas and live in the United States that we feel bonded to."

New York-based activist Andres Duque countered that animosity between Puerto Rican and Neuyorquino activists does exist. He concluded, however, that if anything that means that national organizations in addition to GLAAD should devote even more time and resources to support efforts on Puerto Rico.

"If you ask anyone who’s a leader in the gay community in the United States what is the next state or commonwealth to codify same-sex relationships, nobody would say Puerto Rico," Duque said. "It’s shocking to me there’s not more support from organizations in the United States... to make a push."

Serrano remains unfazed despite. He confidently predicted the island will grant marriage to same-sex couples within 10 years. Serrano asserts, however, the Puerto Rican government need to catch up with the majority of their constituents he argues support LGBT rights.

"Puerto Rican culture has been very welcoming and inviting of LGBT people," he concludes. "It’s up to the law to catch up with the Puerto Rican people."