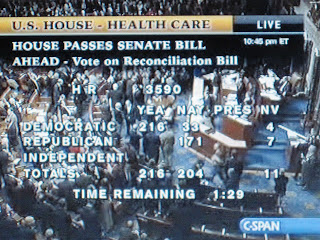 It’s rather ironic I continue to suffer from spring allergies in the wake of last night’s health care reform vote, but it was certainly a breathtaking thing to watch.

Partisan-inspired rhetoric, patriotic speeches, homophobic and racist slurs and ludicrous predictions, such as a 20-year-old Pittsburgh man’s claim on C-SPAN this bill would lead to the president “telling people when to sleep,” simply fail to capture the fact this issue remains intensely personal for so many people in the country. I have not had health insurance since Feb. 2007. And while I remain healthy--I’ve even lost 35 pounds and lost more than three inches on my waist in the last six months due to regular exercise, a largely Mediterranean diet and an all-around healthier lifestyle--a sudden illness or injury would instantly prove financially catastrophic.

This bill almost certainly does not go far enough to ensure all Americans have access to quality and affordable health care, but last night’s vote is a historic step towards that goal.

Hey Mike! I totally agree with you. Health care is personal and for better or worse at least it's "change." And congrats on the the healthy lifestyle changes! I learned in my nutrition class at med school that the Mediterranean Diet is the most sane and beneficial diet out there :-) Take care!