New York City Council Speaker Christine Quinn [D-Chelsea] made history last January as the first woman -- and first lesbian -- elected to head the City Council. She could also make history as the first openly gay mayor of New York if she declares herself a candidate to replace Mayor Michael Bloomberg. One can also easily argue Quinn has become a Democratic wunderkind of sorts with her increasingly active role in U.S. Sen. Hillary Clinton's presidential campaign. Some of her gay and lesbian constituents, however, have become increasingly unhappy with Quinn since she took the helm of the City Council.

A number of New York activists have expressed their displeasure with the former Anti-Violence Project head to me in informal conversations over the last couple of months. A group called the Radical Homosexual Agenda even protested Quinn during the City Council's annual LGBT Pride commemoration event last week. Gay City News chronicled these tensions in an expansive feature in this week's issue. Long-time activist Allen Roskoff told Duncan Osbourne Quinn's support of a bill which would require bars and nightclubs to install cameras and scan customers' identification caused outrage among club land impresarios. The article also detailed the most recent clash over the New York Police Department's new regulation which requires a permit for events in which 50 or more people will attend.

Some activists may surely question Quinn's seemingly close relationship with Bloomberg -- a stark contrast to that of her predecessor Gifford Miller -- despite a series of scathing statements against the mayor after he opposed the Equal Benefits Law and appealed New York State Supreme Court Justice Doris Ling-Cohan's 2005 ruling which found the state's Domestic Relations Law unconstitutional. Quinn clearly rose through the ranks of New York LGBT activism through her work with state Sen. Tom Duane [D-Chelsea] and the Anti-Violence Project. She now enjoys a citywide platform upon which she can expand her agenda as speaker and possible mayoral candidate. Quinn certainly has benefited LGBT New Yorkers through her visibility and activism over the years. For better or worse, however, they are now only part of her overall constituency as head of the City Council. 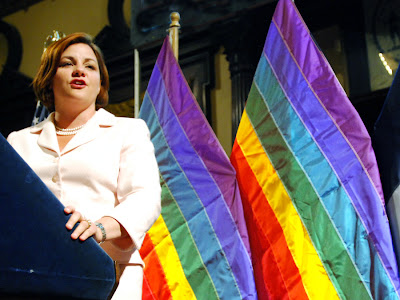