This blogger officially welcomed his new brother-in-law into the family yesterday as more than 120 people from across the country gathered in Bedford, New Hampshire, to attend his sister's wedding. The weather held out well. The food was amazing. Guests celebrated the new husband and wife as they prepared for their two week honeymoon in Hawai'i. The day was simply splendid!

New Hampshire Gov. John Lynch signed a bill into law earlier this month to allow same-sex couples who live in the state to enter into civil unions. The legislature in neighboring Massachusetts is slated to debate the future of a proposed Constitutional amendment to ban marriage for gay and lesbian couples this Friday. Oregon and other states have made steps towards full marriage equality this year. All of these advances remain vitally important to not only the movement but to the couples who seek the same rights and privileges as their heterosexual brothers and sisters. This blogger questioned extensively whether he would make a political statement in support of this effort. The answer to this question became clear almost immediately. Yesterday was not a day to stand on a soapbox. Yesterday was a day to celebrate the relationship of his younger sister, her spouse and to celebrate the start of a hopefully long life together.

Some activists may decry this decision as another example of selling out the cause. Others may say this decision represents personal cowardice at the expense of the broader fight for marriage equality. So be it. Sometimes it is necessary for activists [and the movement] to step back for a few minutes [or hours] and simply enjoy a wedding or a commitment ceremony for what it is. Commitment, love and devotion remain universal values of which some seem to loose track in the fight for marriage equality. Activists and the movement as a whole should not stray from these universals as they move forward this cause. It is the only way to succeed... congratulations Beckie and Pat! 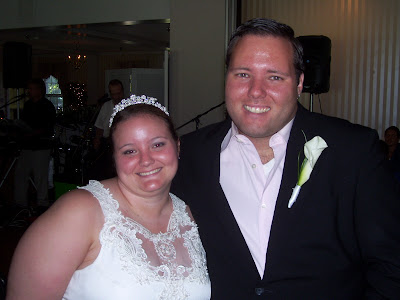 Boy in Bushwick [right] with his sister Beckie after her nuptials in Bedford, New Hampshire