Manhattanite Khadijah Farmer, her girlfriend and their friend were among the more than half a million people who packed the city late last month to attend New York's annual gay Pride march. She told reporters, however, their day turned sour after a bouncer at the popular Caliente Cab Company escorted the trio from the West Village restaurant after he mistook Farmer for a man while she used the women's restroom

"The bouncer burst into the bathroom," Farmer told reporters at a press conference earlier today outside the Caliente Cab Company on Seventh Avenue South. "He started banging on the stall door... it was horrifying."

The restaurant declined to respond to Farmer's allegations despite their past support of a number of local LGBT organizations. Transgender Legal Defense & Education Fund Executive Director Michael Silverman represents Farmer. He told reporters he and his client may consider legal action against the Caliente Cab Company if the restaurant does not respond to their demands -- adopt and enforce a policy which bars discrimination based on gender identity, expression and sexual orientation; train staff to comply with various New York public accommodations law and compensate Farmer herself. This case remains highly ironic due to the fact it allegedly took place after New York's annual gay Pride parade. The Caliente Cab Company remains clearly on the defensive as it faces reporters' questions about why the bouncer allegedly targeted Farmer and the overall nature of the restaurant. Answers to these questions will almost certainly continue to unfold over the next few weeks if and/or when the restaurant decides to respond to these allegations. 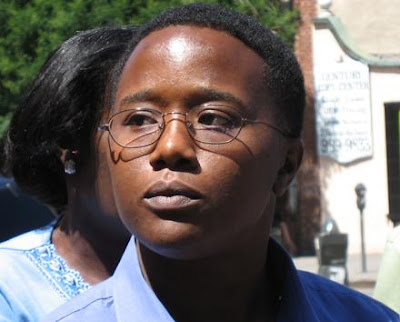 Khadijah Farmer, 27, speaks to reporters outside the Caliente Cab Company restaurant in New York's West Village during a July 2 press conference. She alleges a bouncer escorted her, her girlfriend and another friend from the restaurant after he said she was too masculine to use the women's restroom. [Photo courtesy of 1010 WINS]

It is unconscionable that the restaurant refuses to comment on the matter. All self-respecgting LGBT individuals ought to unite on this. For those LGBT folk who wish to pretend that such discrimination doesn't exist, this ought to wake them ought of their "Will and Grace" loving reverie.

What can we all do to make sure that this restaurant and others like it don't continue to succede?

I agree, we should all stand strong on this. Change comes in numbers that will never ever change. This woman can make history in the LGBT community and we should support her hard on this, boycott their asses.

we ought to be asking all the news outlets why they didn't press for a response from the restaurant. Instead those that did carry the story relied on the AP report. They even carried an ad for the place boasting the large sized drinks and other crap the place offers.

Why have we not DEMANDED the restaurant to explain why its management did not immediately distance itself from the actions of the bouncer?

This goes beyond the LGBTQ community, but impacts us most directly. Why is it less important than Paris Hilton going to jail?

How do we work both to close down the restaurant, have supermarkets stop carrying the products of this heinous place, and once and for all, demand our leaders to guarantee our equal protection? Where is Al Sharpton on this? What about anybody else?

i look rather masucline and have been told by other females that i'm in the wrong place when i go to the bathroom. That in itself is embarrassing. I try to not to use the bathroom in public places. I cannot imagine what it would feel like to be thrown out of an entire restaurant. There was no need for her to be thrown out she wasn't causing a problem. The woman and the bouncer should have apologized when they found out she was female like any respectable person would have done.

and the restaurant has yet to issue an apology...
now imagine that the story is true... a patron told the bouncer that a man was in the restroom. What was that man doing? jerking off? no -
flashing? no...

I've walked into public restrooms and seen mommies with their sons and daddies with their girls in men's rooms. Does anybody think that those people would have been quickly booted out? no

There ought to be a very public staged protest outside this miserable establishment that has the gall to be in the WEST VILLAGE.

clealy, a genius has spoken. She is a woman, therefore, she has dressed like a woman.

I know Khadijah personally, and I totally support her for standing up for herself.

Regardless of what she "looks like", once she offered to show ID, they crossed the line. Period.

A few days after the incident, we went to go take photos outside of the establishment and a man stopped her and on the street and said, "Excuse me miss, can I bother your for a cigerette?"

Now if this stranger on the street can recognize that she's a female, what's this bouncer's excuse?

The restaurant still has not made any public statement...and yet, it's still standing

FYI it's fairly common for potential lawsuit defendants not to comment on allegations, etc.

FYI it is fairly common for people to not speak about specifics of a case but to reassure the public that they are not homophobic or racists...

Caliente Cab must not care if it has offended the LGBTQ community, or for that matter, any of humanity. It could simply make a statement assuring the public that it values all people, without jeopardizing any law suit.

Of course, as a restaurant, they should have comped. the meal and fed ever last person waving a rainbow flag...but the LGBTQ community continues to take whatever it is handed and will not stand up for itself.

Forget about lawsuits or LGBTQ or any other letter for a moment
A patron was rudely treated by a bouncer, and despite the error of the bouncer, the patron was forced to pay the bill and thrown out of the establishment.

After the event, the company stands by the side of the bouncer.

Now: consider that the patron WAS an African-American woman and a lesbian.

and probably the bouncer didn't pass a lot of tests or go through any special training, so that firing the bouncer or moving him to a different location could have been done without much loss to the establishment.

Clearly, this is an issue of racism and homophobia. It would be interesting to know how many other people have been treated in a similar manner.

Have you no shame?: One of the lawyers representing Caliente Cab is Randye Bernfeld. Is it the same Randye Bernfeld who takes pictures as a member of the Lesbian and Gay Law Association of Greater New York?

Have you no shame Ms. Bernfeld? Or do you keep your hair longer than the offended party?

From the Gay City News: "According to Silverman, Randye Bernfeld, an attorney representing Caliente, has twice said no to demands from Farmer that the restaurant adopt a policy barring discrimination based on gender identity and expression and sexual orientation, that it train its employees in applicable state and city laws regarding the rights of LGBT New Yorkers, and that it compensate the young lesbian.

Silverman said that the amount of compensation TLDEF is seeking on Farmer's behalf has not been specified.

He argued that the incident is a clear violation of a 2002 amendment to the city's Human Rights Law which bars discrimination based on gender identity and expression. TLDEF charges that the bouncer acted in discriminatory fashion in ejecting Farmer because of the way she expresses her gender.

"Discrimination against transgender people, or gay men and lesbians who do not conform to gender norms, has no place in New York City," Silverman said.

But that claim seems to have encouraged Caliente in the belief that there may be a legal end run around Farmer's rights. According to Silverman, Bernfeld, in a second conversation with TLDEF on July 2, inquired as to whether Farmer is in fact biologically female, whether she has any male sex organs, and whether she intends to transition to male.

Silverman speculated that Bernfeld's line of inquiry stemmed from the fact that Farmer is being represented by a trans legal defense group, a conclusion he said reflects a misunderstanding of what the gender expression and identity language in the city Human Rights Law means.

"I understand why they would ask the questions they did," he said, "but the clear sense that I have is that they don't know what has taken place. They have not done any investigation."

In fact, immediately upon being approached by the bouncer, Farmer, who said she has been challenged in the past about her gender, offered to show her driver's license, but the Caliente employee told her, "That is neither here nor there."

I guess we should be glad that Tucker Carlson didn't get into the restroom. He jokes about bashing members of the LGBTQ community in restrooms - and MSNBC lets him do it.