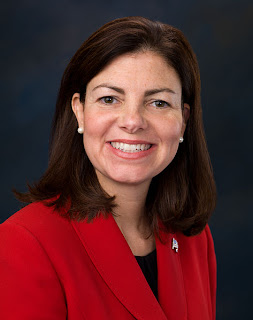 New Hampshire Sen. Kelly Ayotte told Politico’s Mike Allen at a post-State of the Union panel in Washington, D.C., on Wednesday that former Massachusetts Gov. Mitt Romney's quest to capture the Republican presidential nomination will be a difficult one.

“He’s got a tough challenge ahead of him right now,” she said.

A new Quinnipiac University poll finds that former House Speaker Newt Gingrich has nearly erased Romney's double-digit lead among Florida's likely Republican primary voters since he won the South Carolina primary on Saturday. Ayotte stressed his campaign infrastructure remains strong in the Sunshine State, Virginia and around the country, but she said she expects the GOP nomination process could go into June.

“He will be on every single ballot,” she said. “I think he’s going to win. I’m not going to say it’s going to be an easy fight.”

“He has an alternative reality as to where we are at,” she said, further accusing Obama of lecturing Congress to bolster his re-election campaign. “He was talking well beyond the chamber. He walked the fine line of making a campaign speech and a State of the Union speech.”