Pelosi: Democrats "Have a Plan" to Regain Control of the House 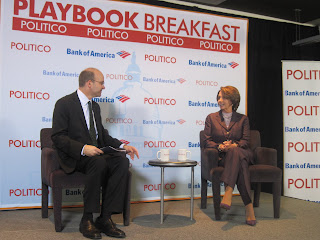 House Minority Leader Nancy Pelosi certainly exuded confidence about her party's prospects of regaining control of the House in November during Politico’s monthly Playbook Breakfast at the Newseum in Washington, D.C., earlier on Tuesday.

“Right now we see a path towards that victory 10 months from now,” she said.

It is unclear whether Democrats will actually pick up the 25 seats they need to regain control of the chamber. The Democratic National Committee have so far held roughly 400 events in 75 House districts during this election cycle.

“We have a plan,” stressed Pelosi. “We have the candidates and that’s a big selling point.”

Congress ended 2011 with a historically low 11 percent approval rating. While not specifically endorsing a Capitol Hill-specific strategy, Pelosi strongly suggested that Obama should indeed campaign against this "do-nothing Congress."

“This Congress has done such a disservice to this country,” she said.

“When we win, the first order of business is to reform… the system and try to amend the Constitution to change the ridiculous notion that any and all kinds of money can weigh into a campaign,” she said in response to Politico's Mike Allen's question about the Occupy movement.

Pelosi also described last night’s Republican presidential debate in Myrtle Beach, S.C., as a “contest without a winner.” She suggested evangelicals and other conservatives are actually looking towards 2016 because they realize former Massachusetts Gov. Mitt Romney is not electable against President Barack Obama.

“The so-called right wing of the Republican Party… are not supporting Romney, at least not yet, because they don’t think he’s going to win,” said Pelosi, noting Romney’s position against direct talks between the United States and the Taliban in Afghanistan and other issues are either “uninformed” or “simply wrong.” “They question what he stands for. I’m not sure he knows what he stands for, and that makes it harder.”